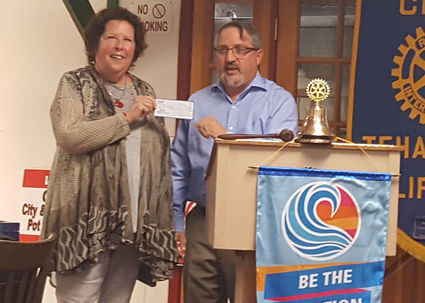 David Brust, organizer of the Tehachapi Beer and Wine Festival hands Rotarian Linda Carhart a donation check for $1,500 in appreciation for the Rotary volunteers that helped with the July event.

The speaker at the Sept. 27 Rotary meeting was David Brust, organizer of the Tehachapi Beer and Wine Festival. Before his talk on Measures J and K, Brust presented the local Rotary group with a check for $1,500 for their volunteer help with the Beer and Wine Festival in July. Many Rotarians signed up to help serve beer and wine at the event.

Aside from being the organizer, along with Linda Carhart, of the Beer and Wine Festival and the Apple Festival, Brust is a member of the Kern County Board of Trade, treasurer of Omni Family House and is an Account Executive with KUZZ radio in Bakersfield. He has been associated with media groups for 34 years.

Brust talked to Tehachapi Rotary Club about the two county marijuana measures that will be on the November ballot and why he feels they should be opposed. He talked about the 1996 Comprehensive Use Act that regulated the use of medicinal marijuana and where and how it was to be sold. When he bought his home in Bakersfield, he discovered an unmarked pot shop in his neighborhood and on further research discovered there were 15. He helped to form BRAPS (Bakersfield Residents Against Pot Shops), a group responsible for eliminating 70 illegal pot shops in Bakersfield.

With the passage of Proposition 64 in 2016, everything changed until the Kern County Board of Supervisors voted earlier this year to ban all commercial pot operations in the county. However, two new county measures have made it to the November ballot that would reverse that decision.

Measure J would permit any number of medical marijuana shops in the county. Any commercial cultivation and manufacture would be banned. Shops must be 600-feet from a school, park or youth center. Product would be taxed at 7.5 percent.

Measure K would allow both medical and recreational dispensaries up to 35 throughout the county. Marijuana could be cultivated only along certain areas of the I-5 corridor. Product would be taxed at 5 percent.

Brust argued that as there is no state office for enforcement, it would be up to Kern County to enforce the regulations. The county currently has 10 enforcement officers to cover all of Kern. As an example Brust cited Los Angeles that found enforcement costs were more than twice the income the city would receive from sales. Also, since the marijuana will be taxed, users can still get it cheaper on the street.

"These measures are not the answer," said Brust. He urged everyone to do the research into each measure and those responsible for authoring and financing the measures.