From abused and neglected to stable star: A donkey's tale 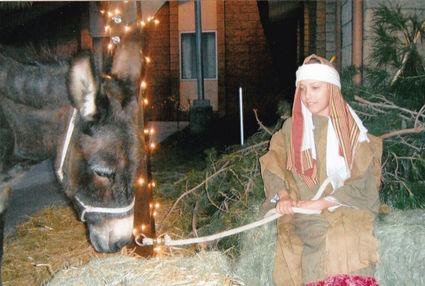 Each year at the Tehachapi Crèche Festival held at the Church of Jesus Christ of Latter-day Saints, a live nativity is portrayed, which has become very popular. Children and adults are dressed in Nativity costumes and pose for 20-30 minutes in the facsimile of a stable. (The stable was built as an Eagle project by Grant Nettles.) The scene is very serene with soft lighting and Christmas carols playing quietly in the background. The spirit is so strongly felt by the onlookers that many are moved to tears.

While the Holy Family is the center of attention, the star of the event is definitely Kelly the donkey, standing calmly, contentedly munching hay and watching the watchers. People inquire specifically about the donkey hoping she will be in the live nativity again. Looking at her, one would never guess how she once was.

Kelly is referred to by her owners, Mara Wada and Jeanne Gordon, as "Bogo" (buy one, get one). Several years ago, the women went to look at Rosebud, a mammoth donkey they were thinking of buying. There was a catch to the deal: if they bought Rosebud they had to take Kelly as well, as the two were inseparable. Kelly had been rescued from abusive owners who used her to practice roping. Her legs were scarred as well as her mind. Kelly's fear of people and ropes made her difficult to handle. Using natural horsemanship techniques, as well as clicker training, and a lot of love and patience, Kelly slowly learned to trust people and now leads, packs and drives. To get to the live nativity, she has to load into the trailer at night without a companion and travel 45 minutes, then she stands for two hours with people and animals she doesn't know. (Unfortunately, the goat and mini horse who have been in the past nativities have both passed away). ln addition to being in the live nativity, Kelly also participates in the Bear Valley 4th of July parade. This once abused and neglected sweet donkey has become very special – truly a Christmas miracle in itself.