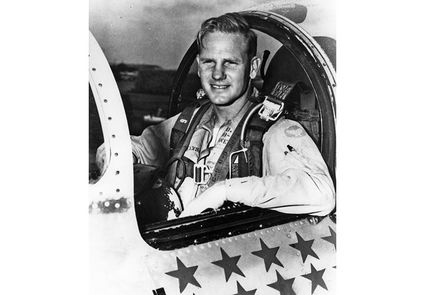 Blesse in the cockpit of an F-86 in Korea.

During the Korean War, comparisons between the F-86 and MiG-15 were always made by the pilots on both sides. The MiG was able to fly higher and always had the advantage for the start of battles. The MiG had a better rate of climb, and thrust to weight ratio, also the armament was superior, as they carried one 37-mm and two 23-mm cannons, compared to six 50-caliber machine guns in the F-86.

Russian pilots later admitted that the F-86 had better fuselage aerodynamic form, gained speed faster in a dive and had a lesser sink rate when recovering from a dive.

The E-model F-86 is powered with an Avro Orenda-14 engine that develops 7,500 pounds of thrust and was favored among fighter pilots. Originally, F-86s were designed and built by North American Aviation, but Canadair Ltd. of Canada signed an agreement with North American in August 1949 to build Sabres.

In 2011, my husband Al and I attended the Southern California Friends of the America Fighter Aces in Hawthorne and met Maj. Gen. Frederick "Boots" Blesse, USAF (ret.) F-86 Sabre Ace in Korea.

I have heard stories of "Boots" Blesse for years, but to meet him personally and hear him tell about flying the F-86 was truly special. We have often heard former fighter pilots tell us their favorite aircraft to fly was the F-86 and when you see the look in their eyes when they are talking about it, you know it's true!

He was asked what attracted him to aviation and he replied, "The thing that attracted me to aviation, I think, was Eddie Rickenbacker. Rickenbacker was my hero from the time I was about 8 years old, and I don't know exactly why, but I always wanted to be an ace, like he was."

Another question was, how did you get your nickname, 'Boots?'

He said that he received his nickname when he was very young. He liked to put his tiny feet into his dad's boots and try to walk around. His mother would hear him coming down the hallway and say, "Here's comes boots." The name stuck.

During his second tour in Korea, April to October 1952, Blesse flew the F-86 and in a 1997 interview for "Sworn to Secrecy - Secrets of War" by the Documedia Group, a television documentary series, Frederick "Boots" Blesse said: "To me it was a great privilege to be assigned to a fighter squadron in Korea at that time, and get some air-to-air experience."

Blesse was a natural leader and when he joined the 334th FIS, 4th FIW, at Kimpo, Korea he led by example and was described as a "fierce competitor" by squadron mates.

He flew 121 missions during his second tour in Korea and shot down nine MiG-15 jets and one Lavochkin LA-9, propeller driven aircraft.

"It was very frustrating because we couldn't get at them. You'd get a MiG in trouble and he'd streak across the Yalu before you could shoot him down. You'd have to break off and let him go," said Blesse.

But in late November of 1950, the Chinese ground forces entered the war in full force. After that we got permission, we were allowed "hot pursuit."

Blesse said, "If we had the enemy in sight and had engaged him, we could go across the border and shoot him down. But under no circumstances could we shoot airplanes or anything else that was on the ground. We could only shoot an airplane down if we were in hot pursuit."

He was a guy who had a strong desire to be in the game! His famous books, "No Guts, No Glory" and "Check Six," are legendary among fighter pilots.

During the Vietnam Conflict, Blesse served two tours in Southeast Asia flying the F-4 Phantom. While on his first tour in 1967-1968, he flew 156 combat missions and flew with the 366th Tactical Fighter Wing called "The Gunfighters."

Tech. Sgt. Samuel Morse, 366th Fighter Wing Public Affairs, wrote an article about Maj. Gen Blesse and said that the 366th's name could be traced back to Blesse and his determination to fight to win in Vietnam. He was frustrated with the MiGs flying close to the ground, because it confounded the missiles guidance systems on the F-4s. If there were objects on the ground, the air to air AIM-7 Sparrow missiles would miss the MiG every time. 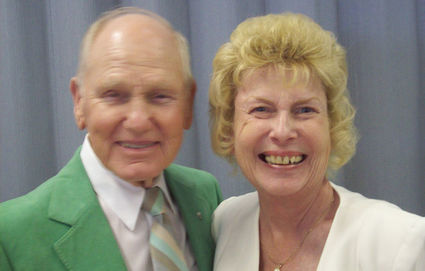 Blesse gathered representatives from McDonnell Douglas, maintenance crews in the 366th Armament and Electronics Maintenance Squadron and 366th Field Maintenance Squadron together to work out a solution and they moved jamming pods in the aircraft, to make room for a 20-millimeter Gatling gun.

According to the article, the change was unmistakable, as Blesse's unit took down 12 enemy aircraft right away. When word spread of the victories, the 366th became known as the "Gunfighters."

He retired from the USAF on April 1, 1975, with more than 6,500 flying hours in fighter-type aircraft and more than 650 hours combat time to his credit.

Blesse passed away in October 2012 while golfing in Florida. He was 91. What a great memory to know that I was able to meet this military hero.