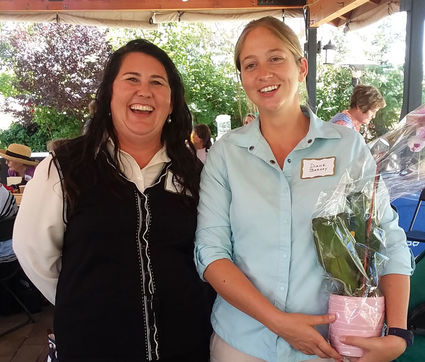 Sandra Urias and Diane Barney who spoke to AAUW about their work in aerodynamics.

It is challenging for women to enter fields that have traditionally been dominated by men. This was the message heard by members of the American Association of University Women at their September meeting. Diane Barney and Sandra Urias shared their experiences working in aerospace. Both have a love for flying and each owns an airplane, in fact more than one.

Barney graduated with a degree in aeronautical engineering from Purdue University and immediately took flying lessons. Her first airplane was a 1946 Piper Cub which she still enjoys flying.

She joined the Air Force and served active duty for 20 years. She left for a dream job at Scaled Composites where she had hands-on experience with aircraft. Her next dream job is to work in private space travel, and she will soon move to pursue that field.

Urias works for Virgin Galactic, but she began as an aircraft mechanic in the early 90s. She was the only woman on the Air Force flight line so she worked hard to prove she could do the job. She did not complain and she backed up her team. She also learned not to take things personally, and soon she gained acceptance as an important member of the group. Since separating from the Air Force she has been doing aerospace technical writing.

One day a friend invited her to ride along in a float plane in Alaska. It was so exciting that Urias took lessons and learned to fly. She owns a Cessna 182 and a Grumman Tiger which bring her much pleasure.

Both women urged girls to pursue aerospace careers if that is their passion. They recommended learning to fly before graduating from college because it opens doors to more opportunities.

AAUW promotes equity and education for women. Membership is available to both men and women with a 2-year or higher degree. Call (805) 403-4432 for membership information.