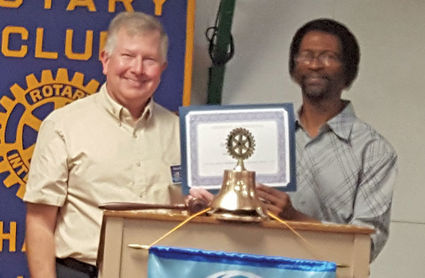 Donald Towns spoke at the Rotary Luncheon on Sept. 13.

The Tehachapi Rotary Club had the pleasure of hearing from local artist Donald Towns at their Sept. 13 meeting. Towns, who has been chosen by Adventist Health to be the Artwork Coordinator for the new hospital, has lived in Tehachapi for 18 years with his wife Karen. The fine arts painter was also the featured artist at Gallery 'N' Gifts this last July. 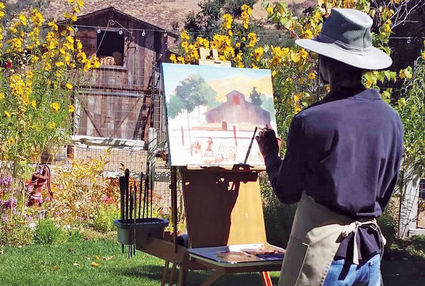 Towns is probably best known for his work as background artist for Disney Studios where he worked on such notable films as "The Little Mermaid," "Beauty and the Beast" and "Tron." He also had the opportunity to work on projects for Disney World, Epcot and Tokyo Disneyland. Among his many experiences was working under the late Thomas Kincade as a digital concept artist.

As a kid in Atlanta, Ga., Towns said he always loved to draw. By the age of 14, he knew he wanted to do it for the rest of his life in spite of the fact that it was not considered an appropriate occupation in the African American community. In high school he took an Advanced Architectural Drawing class and a 12th grade art class. He majored in Architectural Illustration at the American Academy of Art in Chicago. He said it took him two-and-a-half-years to get his first job in architectural illustration. A friend suggested he send his portfolio to Disney; he did and the rest is history.

Towns has launched a website to showcase his beautiful fine art paintings. Check it out at http://www.donaldtownsart.com.