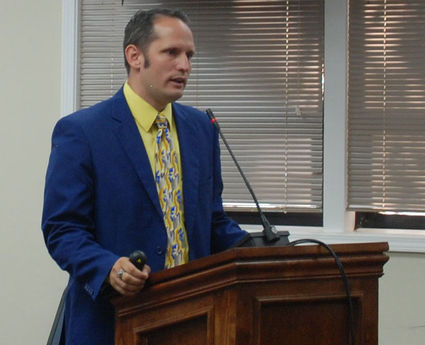 Highland High School Ag teacher and Tehachapi High graduate Michael Leishman presented an appeal to the School Board to find a way to incorporate Ag into their curriculum.

For the second month in a row the Tehachapi School Board meeting room was filled to capacity with those supporting an Agriculture program in the district. On Sept. 11, Highland High School Ag instructor and Tehachapi High School graduate Michael Leishman, along with four of his students, gave a presentation that included suggestions on ways to begin an Ag program here.

Lieshman and his students said that there is a real need with local large growers like Grimway Farms, SunSelect, Millenium Greenhouses, Bornt & Sons and Valley Sod for knowledgeable employees. All of these companies are currently having to hire from out of the area. He said that a student survey conducted at the end of last year showed that 149 JMS students were interested in an Ag program.

There are several possible sources of funding available, they said. A Perkins Loan will fund a teacher for the first two years; although the district would then have to pick it up. There is also a CTE Incentive Grant that would also fund a teachers salary. Agriculture Education Incentive Grants could be used for projects and consumables but would not include a teacher salary. There are also fundraisers that can be held by the students themselves.

They told the Board that there are currently 32 Ag teaching positions available in Kern County so if they wanted to hire a teacher, they would have to make the job attractive. The FFA program at Highland High School includes hands-on classroom learning in the areas of soil testing, agricultural biology, veterinary science, horticulture, business and mechanics. Some of the program is funded by student fundraisers like their annual plant sale. Future Farmers of America is a national program allowing students to be involved all the way from the local level up to the national level.

Board Trustee Joe Wallek said he was impressed by the Foothill program.

"It would be an asset to any school," he said, suggesting that staff look into developing a plan for Tehachapi. Interim Superintendent Paul Kaminski asked the group what two classes they would recommend to start a fledgling Ag program. Lieshman suggested a physical science lab and/or Ag biology. In both cases soil science would be the most important element.

SunSelect Vice President of Operations David Hutchinson suggested other areas in which Ag could be incorporated into the existing curriculum. He said the area of robotics and automation systems are also important in agriculture. "FFA students are approved to train guide dogs," said Tom Martin whose daughter raises them. He added that there are currently 16 dogs in the program in Kern County. 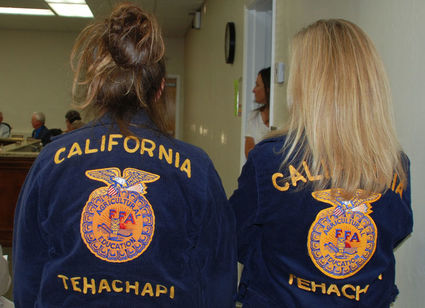 Juan Lopez from Dave Long Associates, the company hired to conduct the superintendent search suggested a timeline for finding a new district superintendent. A stakeholder meeting would be held before the Christmas holidays with a brochure distributed in January. Interviews would be held in March with Board action in April. No decision was made but he will be meeting with the Board again in November.

Trustee Mary Graham suggested the Board form a committee to discuss the possibility of having a student Board member. The position would be non-voting, have no remuneration and would not attend closed sessions. Graham suggested this would be a way to get students interested in government and develop an ability to see both sides of an argument. The position would come from the THS and Monroe population. Interim Superintendent Kaminski suggested making it an ASB position.