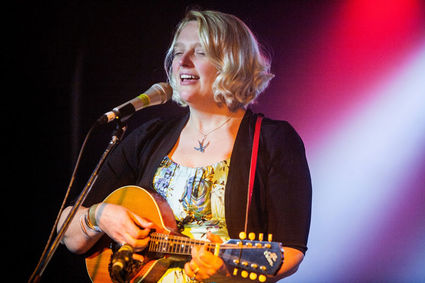 Picture a grandmother who could cure thrush in babies by breathing into their mouths, a cousin who was struck twice by lightning and survived, a grandfather who was shot down on the road to his home, an aunt who left the life of a miner's wife to become a movie star and a grandmother who spoke to a mysterious man named Charlie through a plastic banana.

These are the ancestors of Appalachian singer Jeni (Smith) Hankins, who will be sharing her rich, poetic background at Fiddlers Crossing for the second time, Saturday, Sept. 29, at 7 p.m. She first appeared at the downtown venue two years ago. Hankins' 2016 album, "Heart of the Mountain: 200 Years of an Appalachian Family," made with her former musical partner, Billy Kemp, chronicles the triumphs and defeats of the Smiths across nine generations in the coalfields. Jeni has been called her family's "kinkeeper" because she had spent the last 10 years collecting Smith family stories, transforming them into songs and sharing them across the world.

Hankins grew up in the birthplace of country music, a county over from the Carter Family and just across the Kentucky border from Jean Ritchie and Loretta Lynn. With a voice often compared to Hazel Dickens and a poetic wit often compared to Flannery O'Connor, she brings authentic Southern Appalachian grace and grit to her music. As Kristi Higgins of the Village Reporter described it, hearing Jeni's songs is like "listening to a photograph album," an album full of gingerbread, birthdays, funeral processions, callused hands, dinner buckets and crisp white shirts hung out on the line.

Hankins' current album is called "Oxygen Girl." It features a photograph on the inside cover of one of Tehachapi's familiar landmarks, the old heart and wing gas station sign located on Tehachapi Blvd. on the way out to Highway 58 from town. She snapped a shot of the sign during her last visit, and so loved the image that she chose to use it in the album's artwork.

For her return to Fiddlers Crossing, she will be performing solo, playing guitar, mandolin, banjo and autoharp. There will even be a sewing machine onstage! Come to Fiddlers Crossing Sept. 29 for a musical evening in the mountains of the Appalachian coalfields. It will be an evening rich in humor, pathos and down home humanity.

Fiddlers Crossing is at 206 East F Street at Robinson Street, in Downtown Tehachapi. Tickets may be purchased next door at Mountain Music, at Tehachapi Treasure Trove, Tehachapi Furniture in Old Town and Lucky's Barbershop, or online through http://www.Fiddlerscrossing.com. Tickets to the concert are $20, and as always, coffee and goodies are included. The concert begins at 7 p.m. Doors open at 6:30 p.m. sharp.

On the horizon: Beth Wood, James Lee Stanley and West My Friend.