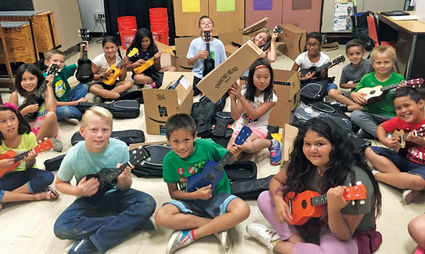 Tompkins Elementary School will be the first to start a before school ukulele jam club.

Anyone who reads this column probably understands my love of music. Whether the quiet hum of a dulcimer or music that just feels right in the moment, music has always deeply touched me.

It's no wonder my kids have (in my opinion at least) excellent taste in music, not to mention an exceptional appreciation of music. I have to say I am quite proud that both my 8-year-old and my 2-year-old quickly identify a wide-variety of genres and musicians when they pop up in the shuffle of my iPhone. Lady Gaga, Bob Dylan, Tom Petty, David Bowie, Joan Baez, the Hamilton soundtrack ... they are all greeted with the same level of appreciation and sing-a-long enthusiasm from my lil' music lovers.

My daughter, who turns 8 years old this month, has had a lot of fun learning music at school. Sharon Nettles, who travels between the three Tehachapi elementary schools teaching music, has been with the district for three years. My daughter always spoke highly of her and counts the days until her next weekly music class. We switched schools this year and were both very happy when we realized Nettles would still be her teacher.

Nettles has both a multiple subject and music credential and has taught first, second and fourth grade students in a regular classroom setting. Now, she travels between the schools, teaching music to transitional kindergarten through fifth grade classes. Transitional kindergarten through second grade get 30 minutes of music lessons for eight weeks during the school year and third through fifth grade get 30 minutes weekly all year. From personal experience, that short amount of time makes a big impact.

"Last year third grade did a show on holidays around the world. It included songs from Africa, Chinese New Years and Hanukkah. Fourth grade does a show about going west for the Gold Rush ... fifth grade this year is doing a show that goes through popular music starting with the 20s called, "On the Radio." Every school does the same show at each school," Nettles said.

What I like best, both from my personal experience watching my daughter's appreciation for music grow and Nettles excitement about teaching, is how much the world seems to expand with each lesson.

"I love teaching children about music because it opens a whole new world to them," Nettles said. "Each week I try to make musical memories that they will remember throughout their lives. We do a lot of different activities to instill confidence and teamwork. Children try new things and learn to take risks. I see children that are shy going out of their comfort zone and then they are amazed that they did it."

I understand being shy when it comes to confidently picking up an instrument. Nettles and I share this.

"I was very shy and had very little self-esteem as a child. It took a music teacher to push me. I would get so nervous for every performance and I would make so many mistakes, because I was so nervous," she said. "My love of music helped me to keep trying and gradually I got better and better. It was that confidence I gained through music that carried over into the rest of my life and now I know that if I work hard, I can do anything. That is what I want my students to learn and have fun along the way."

After a summer music class, Nettles won four ukuleles and had the idea to start a ukulele club prior to school.

"When school started I asked my students who would want to come before school to learn to play ukulele," she said. "Almost everyone's hands shot up. I put a project donation for 10 ukuleles on Donors Choose. Within four days the project was funded."

Tompkins is the first elementary school to start the ukulele jam club, which begins Oct. 4.

"I was overwhelmed by how quickly parents, teachers and the community donated to make this adventure available to the students. I hope to open ukulele clubs at the other two schools soon," Nettles said.

If you're interested in donating to future music adventures by Mrs. Nettles, visit donorschoose.org/snettles.

Watching kids get lost in music, whether simply singing along or exploring a new instrument, is very inspiring to me. My daughter is thriving and never fails to express how excited she is for music day.