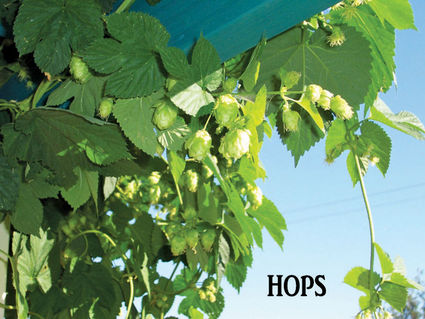 The word hop is derived from the Anglo-Saxon word hoppan, which means to climb. The hop vine (humulus lupulus) will spiral up 25-feet each growing season. Since it dies to the ground in the winter, its growth rate and pattern are amazing to watch. The hop plant is dioecious, which means the male and female parts exist on different plants. It is the flower (strobile) of the female plant that is harvested for beer making and most other uses we will discuss here. Since a pollenizer is not needed the male plant is rendered useless in beer making.

Hop flowers give beer its typical flavor and act as a natural preservative. They have been used in France and Germany for brewing since the ninth century. The name bier is of German\Dutch origin. Until 1964 the flowers were picked by hand for use in beer making. Many Europeans took a vacation in September at "hop picking" time making some extra money while enjoying the great outdoors. In Belgium as many as 10,000 foreign hoppickers assisted the locals.

Due to the invention of a mechanical harvester, hops are no longer picked by hand for industrial purposes. In order to keep the tradition alive some countries have very elaborate "hop festivals." They include parades, music, food, festival queens, visits to hop fields and foaming tankards of beer. In Stallion Springs the Oktoberfest on Oct. 6 will feature cultural food, music, festivities and local craft beers.

Beer is the primary, but not the only culinary use of hops. The tender shoots that appear in the spring are a tasty vegetable. They are a bitter version of asparagus and string beans. (See recipes). A tea made from the plants fresh flowers may relieve insomnia (see recipe). Dried hops are used in sleep pillows to induce restfulness. Abraham Lincoln and King George lll are said to have used such cushions. Today they are often used in combination with lavender for a variety of small, resting pillows. The hop vine and flowers are lovely in ornamental wreaths and other dried arrangements. In Scandinavia the stems are used to make a coarse cloth and in the weaving of baskets.

Hop is a perennial vine with large, deeply lobed, toothed leaves and cone-shaped flowers which resemble papery green catkins. These have a fresh and piney aroma. The plant is dynamic on an arbor, trellis or pergola because it naturally twines vertically. Each vine needs a pole, string or other support as it ascends. They cling to each other and climb in clusters as their numbers increase. The hairy stems are very prickly and can cause dermatitis. Plant it away from pathways and wear gloves and long sleeves when harvesting or cutting it back in the fall.

Hop grows well in rich, deep, humusy soil with plenty of sun. It requires good drainage and air circulation, as well as extra water during hot spells. Plants are usually full bearing by the third year. More and more shoots come up each year, and will eventually need to be thinned out. These "suckers" can be dug up in the early summer for transplanting. The strobiles should be picked when they are amber, partly dry but still a bit sticky. You may use them fresh or dry them by placing them on a screen with good air circulation and out of direct sun-light. They deteriorate in color and flavor due to oxidation if not used quickly.

You will not go hop pickin' until you have had a plant in the ground for three years. If you put one in this year, however, you can eat the young shoots in two years and have a full-blown hops vine in three. I think you will agree it is worth postponing gratification for a couple of years to benefit from the services this swift growing herb renders.

Any hoppan stories out there? Step up you beer makers! Share your experiences with us at [email protected] or herbbasket.net. Hope an Oktoberfest is on your calendar this year!

Pour water over hops, cover and steep for 5 minutes. Drink a cup before bed for insomnia.

Use top 4 inches of fresh spring shoots. Break them off as you do asparagus leaving the tough part.

1. Strip of leaves, blanch and use in your favorite pickling recipe.

2. Sauté or grill as you would asparagus

3. Blanch and chop for use in soups, stews, stir fries and scrambled eggs. May be frozen in portions to be used later.

Use dried strobiles in small pillows as you would dried lavender or combine the two in the proportion you like the scent of.