Baumgart, Kanstein and The Beekay Mural 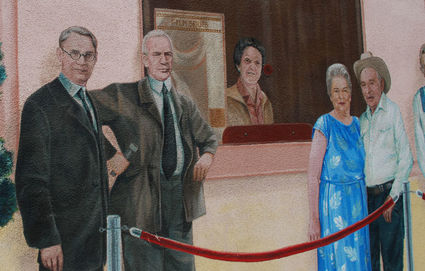 The first three images on the BeeKay Mural from left: Frank Baumgart and Lew and Hazel Kanstein – looking happy to be there, still greeting the public of the small Tehachapi community as they came to the movies in 1936.

The year was 1936. Green Street had just been paved for the first time. We had 15.68 inches of rain that year. Franklin Roosevelt had defeated Alf Landon and was serving his second term as president. The favorite songs being sung and played at the Saturday night dances might be "Pennies from Heaven" or "The Music Goes Round and Round." "Flat Foot Floogie" was one of those nonsense songs being sung that year. A decade later some may remember another such song, "Mairsy Doats," in the 40s. I used to love to sing "Goody Goody," "Moon Over Miami," and George Gershwin's "Summertime." There was a Depression song with its plaintful lyrics: "Brother, Can You Spare A Dime?" My Uncle bought a Hudson-Terraplane in late 1936. It was a 1937 model, but he bought it off the showroom floor in Dec. '36. A beautiful teal blue in color. A new grammar school was built that year costing $43,000. It was later named Wells Elementary.

The year 1936 found two prominent businessmen, Lewis Kanstein and Frank Baumgart, both former mayors, formulating plans to build a movie theater on Green Street on property they already owned. The two men had purchased the east side business section of Green Street in the early 1930s. Thus, the BeeKay Theatre was born. Constructed of steel reinforced concrete it stands, even today, after enduring a 7.5 earthquake and a fire. Movies shown in earlier days had been viewed at the Odd Fellows Hall (now Family Life Pregnancy Center) on Curry Street.

The BeeKay movies were shown each night of the week and the programs changed three times a week. This new business involved people to take tickets and show customers to their seats if they arrived after the lights were turned down. Mr. Kanstein was present in the lobby at show time. Mrs. Kanstein also sold admission tickets. Many others took their turns as ushers and ticket sales but the Kansteins were always the ones "running the show." Most people know that the BeeKay combination stands for their respective names; Baumgart and Kanstein...Bee Kay.

The local BeeKay Mural painted on the exterior southern wall of the vintage theater in Centennial Plaza, has the Kansteins first in line; she at the ticket window and he just outside. The figures of those residents standing in line waiting to purchase tickets were painted by well-known artist Colleen Mitchell Veyna, who is able to take a blank wall and make it come to life. People walking past the Mural sometimes do a double-take before they realize the people standing there are not real.

Mr. Kanstein was a horticulturist and had a green house year-round in his back yard. He also kept temperature and rainfall records. Lew Kanstein was instrumental in seeing an official weather station installed in the Tehachapi region. Nevertheless, he would find time to greet friends in the lobby of the BeeKay at movie time.

Hazel Kanstein kept busy as an artist and was very skilled in making her own greenware for the pottery and dishes she made. They were fired in her own kiln. Samples of her skill have, on occasion, been on display at the local museum.

The Kansteins, long before commercial cruise ships were popularized, took frequent cruises which they booked themselves, aboard cargo ships as paid passengers. The trips worked out well for the couple .

In later years they sold the BeeKay and moved to Cambria where Lew continued his interest in horticulture and meteorology even though suffering from the effects of a stroke. Hazel opened a little shop in her back yard. Her fame seemed to have spread for she made the large candles to be used at Hearst Castle as well as being well-known to local residents.

Mr. Baumgart, as well, was to sell his holdings and move to another location. I remember seeing the "For Sale" sign on his fine looking home and wishing I could see the inside.