The dangers of encountering elk 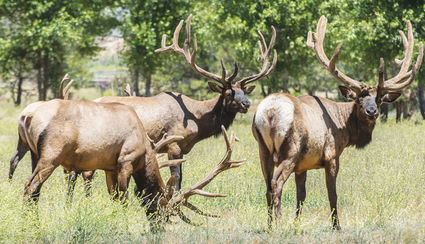 What do reindeer and elk have in common? Antlers. Impressively big antlers in some cases. Now, why in an article about elk, would I mention reindeer? The answer to that question is, to introduce the idea of how dangerous these animals can be. Reindeer are, generally, much smaller than elk and many are semi-domesticated. They are a huge part of the way of life of certain circumpolar peoples. Although semi-domesticated, and they are even milked in some cases, this does not mean that reindeer are "safe" to be around. A significant percentage of the people who work with and handle reindeer regularly have only one eye – the other having been lost in an accident involving antlers. So, close proximity to antlers can be injurious to health.

Many of us are aware that both male and female reindeer grow antlers but, in the case of elk, only the males grow antlers. The antlers start to grow in the spring and are shed in the winter, after the mating season is over. (The mating season for animals such as the elk, who are members of the deer family, is known as the "rut" or "rutting season.") Antlers are actually bone and can grow at an extraordinary rate of up to almost an inch a day! While growing, they are covered with a layer of highly vascularized skin known as "velvet." Once the antlers are fully developed, the velvet is shed. At this time the velvet is in tatters and the elk can be seen rubbing their antlers on the branches of trees in order to remove it.

Those of us who are fortunate enough to see the elk regularly will have noticed that, over the summer, the antlers spread like the branches of a tree until, finally, they reach their impressive zenith. At this time of year, whenever I look at their stately demeanor with heads aloft as they stride slowly and majestically across the countryside, it makes me think of royalty bearing enormous crowns. I cannot help thinking that sporting such racks must surely be a strain. Carrying that much weight around on their heads must surely induce neck ache!

The maturation of the antlers coincides with the start of rutting season, which lasts from August until early winter. At this time their hormones are running wild and their behavior can become unpredictable. Their aggression levels start to rise. If they want to procure a harem of females and be successful in breeding, they have to vanquish their rivals. The male elk begin sparring to determine who is the strongest. At all times the elk should be respected and left alone, but it is particularly important at this time of year as this is the season of peak danger.

Now, you may think, no one would be foolish enough to approach so closely to elk that they would be in danger of coming under attack, much less of losing any eye. Unfortunately, not everyone understands just how dangerous elk can be. I have sometimes seen people approaching far too close to the elk as they obviously have no idea of the risks they are running. Generally, I believe that these people are not local. Once, when some folks were attending an outdoor wedding, I noticed they seemed to be trying to feed sandwiches to the elk! Fortuitously, it was dusk and, before there was an unfortunate incident, it became too dark for anyone to see where the elk were.

Recently a resident, who, admittedly, was new to the area, rode her horse right through the middle of a group of elk resting in the shade of trees in the midday heat – despite the fact she could have easily given them a wide berth and ridden around them. She videoed herself doing this, and then posted the resulting footage on Facebook. Regrettably her Facebook friends did not react with horror at her idiocy, but considered her reckless act as "cool." It is clear in the video that the elk are startled and upset, but she seems to be in complete ignorance of just how dangerous her actions were. Not only was she disturbing the wildlife and risking herself and her animals, but she was playing Russian roulette with the safety of others. If she had made the elk stampede, they could have run onto the nearby road causing a road traffic accident.

In another incident which I happened to witness, a number of elk were just about to cross one of the busier roads. The traffic coming both ways had stopped to allow the elk time to cross. With their typical regal and stately gait, they approached the road. The first elk had almost placed a hoof on the blacktop - and it would have taken the elk no more than 120 seconds or so to cross safely – when one man in a pickup truck, which was two or three vehicles behind me, decided that he was not going to wait, pulled out of the line, revved his engine, overtook us all and sped toward the elk. Startled, the elk spooked and bolted running back the way they had come. Unfortunately, just at that moment, a jogger was passing by on the trail parallel to the road, and she was very nearly mown down by the panicked elk. It was only by sheer good luck that she was not trampled and escaped injury. There were a number of other people on the trail at that time including cyclists and someone with a baby in a buggy. Luckily no one was hit, but it was a close call.

I followed the pickup truck – and it turned out that it was not on an emergency errand as one might have thought - he was simply driving to a residence nearby. I asked him why he could not have waited another minute or so and let the elk cross in peace. His response was that they could cross anytime they liked and it did not matter when. In his opinion, they would simply just find another time to complete their journey. Perhaps, in his mind, he and his errands were just too important to be caused any slight delay by the wonders of nature.

Hopefully now that the authorities have pointed out the error of their ways to these two people and, in particular, mentioned that they have endangered other innocent people by their reckless actions, they will now be more careful and respectful when near elk.

Several times social media has pointed out that some folks are driving off road to get near to the elk. Not only is this illegal and dangerous – not to mention foolish - but it is totally unnecessary. It is very simple to park in one of the parking lots near where the elk frequently hang out, and walk to a point from which it is safe to take superb photos.

Now, why is it that the elk allow us humans to approach so close to them? This is because they are "habituated" to the presence of people. Wikipedia has a great definition of habituation if you are interested in looking up the technical explanation. Basically, habituation means that the animals have become used to the presence of humans and their normal reaction has been attenuated. Does this mean that it is safer to be around the elk? Actually, no, the opposite is true. As the elk have become habituated to us, their natural fear reaction is reduced. This does not mean that they are tame, nor are they pets or safe to be around. They are so used to seeing people on a day to day basis, they are no longer nearly so wary of us. When wildlife loses its fear of humans, this is never a good thing. As elk can weigh up to 1,200 pounds, it is easy to realize that any encounter could be dangerous and potentially have tragic consequences.

Providentially, we do not have much trouble with our elk here, but this is not true of all communities and, if people do not act wisely in our communities, this could change. Jasper National Park in Canada tries to educate people about the dangers of encounters with elk. Initially they recommend caution, and point out that it is better to avoid close encounters in the first place. Extremely good advice! They urge people to give elk plenty of room by keeping a distance of at least 30 yards (about three bus lengths) between themselves and any elk. Remember – if an elk responds to your presence – you are too close!

Males can be especially aggressive during the rutting season. It is inadvisable to come between the males and females at that time. Females can be particularly aggressive during the calving season in spring and early summer because they are protecting their young. Wolves and coyotes are predators of elk, and so many elk regard dogs as a threat. Keeping dogs on leash at all times when out and about (as per Kern County law) should avoid the threat of them approaching elk and provoking a reaction thereby causing a problem. 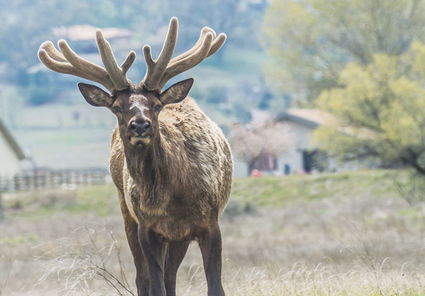 Elk in the meadow near the model airfield in Bear Valley Springs.

Further, the Jasper National Park information advises that, if an elk does get too close for comfort, acting dominant and using anything you have, such as a walking stick or umbrella, to make yourself look bigger may help. They advise maintaining eye contact and not turning your back on an elk. If the elk charges, climb a tree or try to position yourself so that you put a large object, such as a vehicle or rock, between you and the animal. Slowly and carefully back out of the area.

Of course feeding the elk is a surefire recipe for disaster. It is reported that often, when elk start to show aggression, it is because they have been fed by people and they start to approach other people in the hopes of receiving food. When they receive nothing, they can turn belligerent. So, please, no feeding the wildlife!

If everyone uses common sense and caution, we should be able to continue to share the environment with and enjoy the presence of these magnificent creatures without incident.