Flying in a rare Fieseler Storch 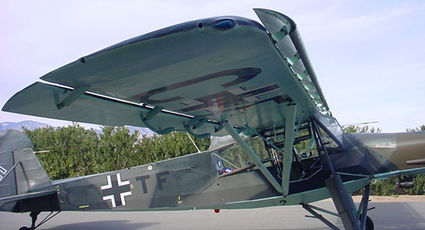 Steve Ericson gave a great presentation at Plane Crazy Saturday last month. He spoke about new aircraft he had designed and old aircraft he had restored. One of the historic aircraft he used to own was a World War II Fieseler Fi 156 "Storch." (Translated: Stork).

I remember a beautiful clear November day back in 2003 when I had a wonderful opportunity to fly with Steve in his very rare German aircraft at Mojave Airport. At the time, there were only two flyable in the U.S.

The Storch was one of the first STOL (short take-off and landing) aircraft ever produced. This aircraft was developed for the German Luftwaffe in 1935. Gustav Victor Lachmann in Germany and Handley Page both developed leading edge slats around the same time.

These slats allow the wing to operate at a higher angle of attack, so the airplane can maneuver and fly at a slower speed without stalling, thereby take-offs and landings can be accomplished in a shorter distance. The wings are braced and set high and the slats extend the entire length of the wing.

The Storch is also equipped with Fowler-style flaps and drooping ailerons. The ailerons are synchronized to droop with the flaps when they extend past 20 degrees.

The landing gear is designed so that the main wheels are located ahead of the center of gravity and the unusual oleo-stroke length, allows full application of the hydraulic wheel brakes.

I remember Steve saying, "We're going to land right there." He was pointing to a short bare patch of desert surrounded by sagebrush and I thought, "I hope we make it." It was like landing a helicopter, truly amazing how slowly we landed. Just as smooth as could be! And the take-off was equally amazing!

During WWII, it needed only 420-feet of prepared landing strip and could land in 126-feet, using maximum braking. The wingspan is about 47-feet and the fuselage length is 32.5-feet.

Steve related some great stories about flying this airplane from Atlanta, Georgia to Mojave in December 1997. Steve thought this would be another opportunity to spend some quality time with his father, so off they went to Atlanta. Steve said the trip to Mojave was expensive and not without a few hair-raising moments.

"We stopped every 200-miles and spent $200," Steve said. His wife, Melissa, remembers that the dollar amount may have been higher.

The first overnight stop was made in Tennessee, waiting for tornadoes to pass. Oh boy, the fun of flying across the country has already begun! On Christmas Eve, they arrived in Kansas where both Steve and Melissa have family, so there was a happy homecoming and fun times telling their flying stories.

"They spent most of their time fixing oil leaks and changing gaskets," Melissa reported. (Isn't that just like a woman to tell the actual truth?) The flight from Kansas West went like clockwork until a little town in Arizona called Quartzsite, not far from Blythe, Calif. That's where the anxiety level went off the scale!

Steve had a friend in Arizona who decided it would be fun to fly along with the Storch on the last legs of the flight to Mojave. The two pilots were talking back and forth on the radio, discussing what altitude to fly at when a very loud explosion just about stopped Steve's heart. An exhaust valve had broken off and one cylinder was lost on the engine.

A pilot always tries to be prepared for an emergency landing and is constantly looking for a place to land if something should occur. As luck would have it, they spotted a nicely graded dirt road with no wires and made a smooth landing. The helicopter was right there following them down and landed nearby. 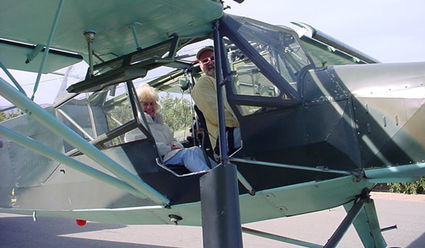 Steve investigated the damage and concluded the valve head had gone out the exhaust. He knew he couldn't fix the problem in the middle of nowhere, so he told his father to ride in the helicopter to Blythe and he started the ailing engine again, took off and headed for Blythe. Thank the Lord, they all made it safely. (This sounds like some of the adventures I have had flying with Al!)

Fascist dictator Mussolini was rescued from the top of a 9,000-foot mountain with a Storch, at Gran Sasso, after Italy's surrender to the Allies during WWII. Two different aircraft from the German Luftwaffe have flown in the Mojave skies. The other aircraft was a Messerschmitt ME-109 restored by the Museum of Flying. They used to have a maintenance hangar here at Mojave.