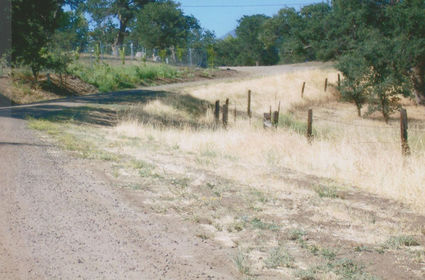 This lovely, peaceful lane is all that is left of the famous Dead Man's Curve.

Years ago when one traveled to Bakersfield over U.S. Highway 466, it involved going down what is known as the "Old Road" which, at one time was the only way one could travel to Bakersfield. To navigate this historic route today, one must proceed west on Highway 202 for nearly three-miles, then turn right on Woodford-Tehachapi Road. This will put you on the old road that we all traveled moving northwest, down past Keene and into the great San Joaquin Valley.

On this route, leaving the Tehachapi Valley, was an infamous turn in the road called "Dead Man's Curve." Just before reaching the intersection of Old Town Road, there was a rather innocent looking curve which throughout the years had carried the ominous title: Dead Man's Curve. I recall, as a child hearing people saying it caused accidents because it was improperly banked and if a person were to go too fast they were in danger of going over the embankment.

Through the years I would sometimes ask an old timer if they could recall any bad accidents on that curve. Most of them would say they didn't have any names to give me but that, "it was a bad part of the road."

When my husband retired from the Marine Corps and we moved to our Golden Hills home, one of our neighbors was killed on Dead Man's Curve in snowy weather. The one accident I could verify in that spot. It could have been just the slippery highway, but it was on the famous, deadly curve.

As newer people came to town the name of the curve became unknown and only the older residents knew of its past reputation. Actually, the old highway itself had numerous sharp curves where many accidents have happened and have taken their toll. It could well have been called Dead Man's Highway.

It hasn't been too long ago that Dead Man's Curve met its demise and was by-passed in favor of a straight, downward grade that Woodford-Tehachapi Road now takes and which intersects with Old Town Road at the bottom of the incline. For several years there was "no left turn area" painted on the road because there was no room for a left turn lane. To stop and turn left to Old Town Road could be hazardous to one's health and automobile for fear of an approaching vehicle topping the hill and moving downward toward the stopped vehicle, hopefully avoiding a collision. The skid marks were interesting and new ones seemed to appear daily for there was no room to drive around on the two lane road.

That's what happened in good weather. In bad weather, when there is snow and ice on the road, one could see autos sliding sideways on the downgrade of Woodford-Tehachapi Road. If they were lucky they missed oncoming traffic. I take Westwood when the roads are bad because there is lots of room for correction.

The Highway Department must have gone through a lot of red tape to finally get permission to widen the road at that intersection. A left turn lane onto Old Town Road now exists and there is room to pass.

Of course, it doesn't help much in the snow and ice in the winter. Sometimes as I turn off Westwood I glance up the road to that straight-a-way on Woodford-Tehachapi Road, I sometimes see a car crossways on the steep incline trying to right itself. You can't have everything.

A portion of Dead Man's Curve still exists in the form of a charming little access road leading off Old Town Road. The name of the scenic little lane is Leah Court. From Woodford-Tehachapi there is no visible evidence of the once famous old curve.