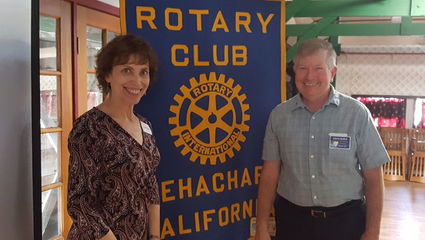 At their July 26 meeting, Tehachapi Rotarians listened as Dixie King, PhD., from Transforming Local Communities, compared Kern County studies done in 2008 and 2014 that pointed out the increasing use of Methamphetamine drugs in the county over the six year period.

According to King, Meth is currently the drug of choice in Kern County. She went on to cite a six year county-wide study. In May of 2008, 37.7 percent of arrests in Kern County were Meth related. In May of 2014 the figure had risen to 50.2 percent. She went on to say that brain patterns caused by Meth are similar in appearance to Alzheimers Disease. Although patients can recover, it may take as long as 2 years for cognition to fully return. Full recovery is rare.

Currently the highest area of Meth use in the county is a triangle that encompasses Mojave, Tehachapi and Lake Isabella; a fact that brought audible gasps from those present. With the passage of AB 109 and Proposition 47, many drug charges are now no longer a felony but a misdemeanor.

In 2010, the Stop Meth Now Coalition was formed to educate the public on the dangers that still exist in Kern County from Meth use. The full text of the two studies is available at http://www.transforminglocalcommunities.com. Dr. King can be contacted at [email protected]