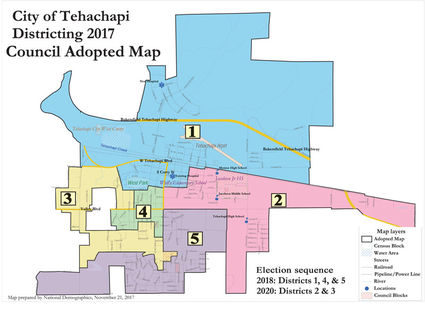 In the November City Council election, all Tehachapi registered voters will be able to vote for one at-large candidate (the unfinished term of Ed Grimes, Dist. 3) and the city treasurer. Voters in Districts 1, 4 and 5 also will vote for their district candidate for City Council. District 2 is not up for election.

As of Aug. 2, a total of 11 Tehachapi residents had requested nomination packets that must be submitted to qualify to run for the Tehachapi City Council on the Nov. 6 ballot. By the closing of City Hall on Aug. 2 (The Loop publication deadline), at-large candidate Michael R. Davies had turned in his completed packet to become the first official candidate in the City Council race.

Three sitting councilpersons are running for re-election and have requested nomination packets – Phil Smith in District 1, Dennis Wahlstrom in District 4 and Susan Wiggins in District 5.

If they qualify for the Nov. 6 ballot, candidate nominees Bobby Fritz, Clete Heckathorn and Michael Gersten will challenge Phil Smith in District 1. Clint Davies, Joan V. Pogon-Cord and Socorro Schmidt have pulled packets to run in District 4 against Wahlstrom. As of Aug. 2, no nominees had applied for District 5, where councilperson Wiggins lives.

Michael R. Davies is running as an at-large candidate to fill the unfinished term of the late Ed Grimes, who was elected under the former at-large system and had 2 ½ years of his term (until 2020) to complete when he died. Grimes lived in what will be District 3 in the next election cycle.

Pete Graff also has requested a nomination packet to run for the Grimes at-large seat.

The only City Council seat that is not up for election in this cycle is that of Ken Hetge, who was elected at-large to a term ending in 2020. Hetge lives in District 2.

Each district has approximately 700 registered voters. The district-based election system, which the City Council approved under threat of a financially ruinous lawsuit, is being phased in, with districts 1,4 and 5 on the ballot in 2018 and district 2 and 3 on the ballot in 2020.

Voters will not have to figure out all this on their own.

"The ballot each person receives will be specific to their district, " Tehachapi Senior Administrative Assistant Tori Marsh told Forde Files. As an example, a person who lives in District 5 will have only the candidates running for District 5 on the ballot, along with the at-large candidates and city treasurer.

"District 2 does not have a candidate until November 2020, so they will only vote for at-large and treasurer. A person doesn't have to know what district they are in when they go to vote. They will be given a ballot for their district when they check in (or mailed an absentee ballot). The voter guide will list all the candidates and what districts they are running for."