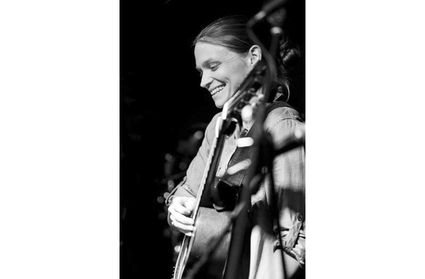 Listening to the old-school country songs and honest back porch voice of Amber Cross has been likened to putting an archival Smithsonian recording on the turntable. Hers is an authentic voice, both in sound and feeling. She writes from her own life's struggles and experiences, with great power and emotion and a sense of place. She will be bringing her raw, old-school country sound back to Fiddlers Crossing for the third time on Saturday, Aug. 25, accompanied by her husband, James Moore on guitar.

Originally from Maine, Cross spent her early years surrounded by gospel music in a small town church where her father preached and her mother played piano. Today she lives on California's central coast, where she spends her days, as she describes it, "slopping hogs, herding chickens, wandering the hills and writing songs."

Cross has lived up and down the coast of California, from Sonoma County, the San Joaquin River Valley, San Francisco and the Sierra foothills, and many of her songs evoke these places. She regularly performs at cowboy poetry, bluegrass and other music festivals, including the Live Oak Festival and the Parkfield Bluegrass Festival. She has opened for such artists as Ramblin' Jack Elliott, Dave Stamey, the The Austin Lounge Lizards and others.

Her debut album, "You Can Come In," released in March 2013, received a 5-star review from "Country Music People" Magazine, and was their CD Of The Month in their May 2013 issue. Her most recent release, "Savage on the Downhill" has been universally praised as well. One reviewer called the CD, "stark, evocative country. The ache in Cross's voice is something you find in every song, which is part of what makes this album so powerful."

For samples of Amber Cross's music, visit http://www.ambercrossmusic.com or http://www.fiddlerscrossing.com.

The concert starts at 7 p.m., with doors opening at 6:30 p.m. Tickets are $20 and are available at Tehachapi Treasure Trove, Tehachapi Furniture, Lucky's Barbershop, or at the Fiddlers Crossing Wednesday Open Mics and First Fridays. Tickets are also available online at http://www.fiddlerscrossing.com or reserved by calling (661) 823-9994. As always, coffee and goodies are included. Fiddlers Crossing is at 206 East F Street, Downtown Tehachapi at Robinson.

On the horizon: David Grier, Jeni Hankins and Beth Wood.