This little piggy went to Frisco

People say my articles often leave them in tears, so I decided to change it up a bit and tell you the story of my recent trip to San Francisco with our new pig, Double Stuff.

Every year I make a trip to San Francisco to do a petting zoo in the city. It really is fun as most of these folks never get an opportunity to see farm animals and the ones that have always have fun stories to tell me.

This year, I took Double Stuff, a tiny handful of a pig that is a Kunekune/Duroc cross. That basically means that while he is tiny today, he will top off between 150 and 200 pounds and the name Double Stuff will truly suit him. (I should say that he was named by a visitor to the ranch who saw him on his first day here.)

Because he is sooo small, I set Double Stuff in a corner in a folding kennel so the other animals would not accidently step on him. The first two hours went great. Parents were lifting their little ones over the kennel and he was loving the attention. Double Stuff was a hit!

Sometime during the third hour, Dub decided there was a lot more attention happening on the other side of the kennel, plus, there was a pool! (Actually, it was a water container that probably looked like a pool to one so small.) And that is when the trouble began.

Dub worked really hard and finally managed to put his nose through the wires of the kennel and lift. He was free! Once out, he raced across the petting zoo area to the "pool" and basically did a cannon ball, drenching (and delighting) the folks around him. For a few minutes we all watched as he blew bubbles and flopped around in the water, then, for some unexpected reason, he jumped out of the "pool" and began chasing Lucy, my karakul sheep. Lucy was terrified of this little thing and did everything she could to evade him, but in the end, Dub had a chunk of her fleece in his itty bitty mouth.

I put him back in the kennel and all was quiet for a minute. Then there went the nose again, lifting the kennel and sending this 8-pound wonder scurrying around the petting zoo after Lucy.

In a bit, he seemed content that he had defeated her and looked ready to rest, so he crawled up on the back of Cuddles, my alpaca, who had decided to lie down to rest. I reached for my camera to get a picture. What a great shot it would have been, Dub nestled into Cuddles soft fiber, taking a nap. But before I could snap the shot, out of the corner of his eye, Dub spotted Lucy. That was it. Off he went to the delight of all the visitors. Lucy tried everything to evade him and finally, as a last resort, she went under Christian, my miniature donkey, for protection.

Now, donkeys are known to be guard animals, so it was probably a good idea, but Christian didn't get the memo. As Dub raced up to him, he began to back up until he hit the fence. By now, Dub was on his back legs heading straight for Christian. And Christian was basically cornered. There should have been music. Christian was literally dancing as Dub approached. He wasn't sure what to do and lifted his left leg, then his right, then his left leg again. Lucy saw an opening and took off across the pen. By now, everyone in the zoo and on the outside along the fence was laughing and cheering Dub on. As he lunged at Christian, I grabbed him midflight. He screamed, well, like a stuck pig and continued to scream all the way to the trailer. 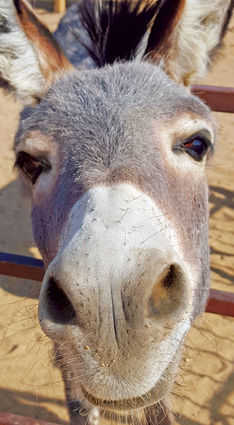 When I returned I announced that Double Stuff was in time out. One little girl asked why and I answered, "He wasn't playing well with others."

I have learned in dealing with animals to never get an animal who is smarter than me. I might have met my match. You can meet him too at Windswept Ranch. Double Stuff will be on display, hopefully in a pen that will hold him, Saturdays through October from 10 to 4 p.m.

Directions: From Tehachapi take Highline east to Tehachapi Willow Springs, turn right and go 11-miles to the "OPEN" banner and turn right up the dirt road. Any questions, call (661) 809-3965.