Tehachapi build a plane project is an attention-getter 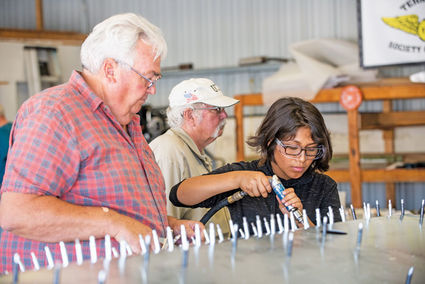 Gabriela Damian works on riveting a wing section under the watchful eye of Daryl Townsend.

The Tehachapi build a plane project, in which local high school students have been building a working airplane with the oversight of adult mentors from the aerospace industry, have been getting a big dose of attention in the past few months.

California State Assemblyman Vince Fong paid the hangar a visit on June 15, and the students were able to greet him and give him some hands-on experience with some of the tools they've become experts at using.

Back in February, television channels 29 and 23 both aired a segment on the project, featuring interviews with project manager Paul Nafziger and some of the students.

The plane continues to take shape. The fuselage is looking much more like an airplane. Wing sections are coming together, tail and rudder sections are completed and the students continue to drill, rivet and assemble parts every week.

Student Gabriela Damian comes to Tehachapi airport all the way from Lancaster. She views this project as a great opportunity to pursue her ambition to become an airline pilot. 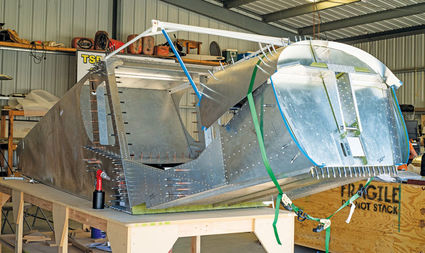 There is no shortage of expert oversight on this project. Paul Nafziger, the project manager, is a retired engineer from BAE Systems in Mojave. Daryl Townsend, another mentor, is a former aircraft crew chief from NASA at Edwards Air Force Base. Gary Childress is a retired aircraft mechanic who worked for TWA when Boeing 747s first flew the skies. Jay Featherstone is a retired FAA-certified repair station manager. Tim McGuire is a retired production manager at Boeing. John Tumilowicz retired from Grumman Aerospace, where he worked on the Lunar Excursion Module. Buzz Wells retired from NASA and was an engineer on the team investigating the Challenger space shuttle accident.

The plan is to finish this plane in about a year's time, after which each of the students who participated will get airtime in the craft they had a hand in building. When completed, the plane will be sold and the proceeds will be used to purchase another kit, giving another group of high school students a great opportunity to build their own airplane.