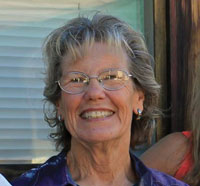 After 27 years of living in Thousand Oaks, Joseph and Cheryl Onesto were looking for more open space, mountains and real seasons. They found a home in Bear Valley and moved into their new home in May. Cheryl is a recently retired Registered Nurse and Joe is a semi-retired real estate broker.

Joe said he was raised in the South Bay area of L.A. and like most young men in 1957, he joined the military doing his active duty with the Air Force. Over the years he has held lots of jobs. He said that for a while he worked in the movie industry as a lighting technician and other various jobs; he has also done voices for Disney cartoons. He even drove a concrete truck for a while. This multi-talented man has a black belt in the martial arts and a multi-engine rated pilot's license. Classic cars have always been his love and he currently owns a 1941 Buick, a 1953 Ford Club Coupe and a 1978 Corvette. He still works as a high-altitude search and rescue pilot when called. He has been a real estate broker for 47 years.

Cheryl was raised around West Los Angeles, Inglewood and Redondo Beach and met Joe while she was attending El Camino College. She said that she worked as an RN for "decades, way too long" – actually around 50 years. Over the years she worked trauma and critical care and finally ended her career in obstetrics including labor and delivery. Many of those years were spent at Providence/St. Joseph's Hospital in Burbank.

She and Joe moved to the San Fernando Valley in 1972 and according to Joe, kept moving until they finally settled in Thousand Oaks. They have two children together and Joe has four from a prior marriage. Their daughter Anjanette was a clinical social worker working with special needs kids until her son was born. Last March, Anjanette donated a kidney to her 3-year-old son.

"It makes for a big family," said Cheryl, "providing lots of grandkids and great grandkids."

Both Joe and Cheryl like to cook and enjoy riding motorcycles. We may be seeing them riding about town from time to time. Welcome Joe and Cheryl. We are delighted you chose Tehachapi.

Larry and Judi Cagle arrived in Tehachapi in May from Bakersfield, about six months after their daughter Amanda and her family moved to Bear Valley. Judi recently retired from 25 years as the Auto Claims Team Manager for State Farm Insurance and the lure of the mountains and family could not be denied. The Cagles had lived in Bakersfield for seven years and before that in Fresno.

For the last eight years Larry has been a Respiratory Therapist. Before striking out in his new career, he spent 26 years in sales for the medical field. It was his job to travel around and set up physician's offices.

Both Larry and Judi were raised in Fresno although neither was born there. Larry was born in Oregon, has two brothers and three sisters and arrived in Fresno when very young. Judi was born in Oklahoma and is an only child of an only child. She was four when her family moved to Fresno. She met Larry at her first job in 1976. Amanda is their youngest daughter and she is the mother of two active boys. Their daughter Azure lives in Carson and has a daughter.

Larry said that he likes to spend his free time working with and riding motorcycles. Judi prefers a quiet place to read. Their two dogs are currently living with Amanda. Twelve year old Harley (Davidson?) is 142-pounds of shepherd mix and Pita is a pit-boxer whose name, as I understand it, stands for "pain-in-the-ass. "

Welcome to Tehachapi Larry and Judi; and to Amanda and her family as well since they have only been here for a short time. We know you will all enjoy your new community.