In 2012, I wrote a story about the Lockheed EC-121 Constellation or Super Connie that was sitting at Camarillo Airport and my son, Mark Burdick was helping Yank's Air Museum get it ready for a ferry flight to Chino.

Just recently Mark wrote his recollections of the project and I thought you might enjoy hearing from the mechanics point of view.

I ran across this video.  It's the ferry flight of the EC-121 Constellation I worked on over in Camarillo.  I started working on it in the summer of 2006 and after a long break, while Yank's Air Museum worked to satisfy the FAA (Federal Aviation Administration), finally finished it in November 2011. See video here: youtu.be/Sx-t8SFLifQ.

She had been sitting at the east end of the runway at Camarillo since 1995. She had been grounded due to corrosion on the wings.  By the time we got to it, the corrosion had grown and had really made a mess of the structure.  Upon first looking at it, it seemed like we could have just used some scab patches for the repairs and been done with it, but we ended up going with factory SRM (Structural Repair Manual) repairs. Very involved and very time consuming. We finished most of the major repairs and submitted them to the FAA.

Note: The structure on those wings is the most incredible thing I have ever seen.  The skin panels are not simply aluminum sheet, but rather milled sections of 7075-T6.  They took a slab of aluminum 20' long and 2' wide and milled them to form hat-sections that were on 2" centers and leaving .100 thickness for the skin surface.  Then each of those vertical stringers were attached to the ribs using angles and everything shot together with aluminum DD (icebox) rivets.  They're very hard so you actually freeze them to help them compress and expand properly.

After we thought we had accomplished all the major squawks, the FAA brought up the two large repairs that had previously been done years ago where the outer wing meets the main wing section.  (Just outboard of engines No. 1 and No. 4.)  We pulled those up and our collective jaws hit the floor. The corrosion had not been addressed and their idea of sealing it was to give it a squirt of sealant, like mustard on a burger, and put this panel down with a few blind rivets.  So, Frank Wright from Yank's contacted an engineer and he came up with a repair and then he called me back.  That was in summer of 2011.

Upon using two .080 thick pieces of 7075 aluminum sheet at 2' x 4', and a huge load of NAS bolts, both areas were ready.  Thankfully, there had been a changing of the guard at the FAA FISDO in Van Nuys, and they had staffed it with some different people.  They were asking internally why we hadn't been given our Ferry Permit, and they received no clear answer. So, they came out to see.  The guy was thoroughly impressed with the work we had done and after meeting with the engineer, Frank and I, signed the paperwork that day.

Having the green light to continue getting it ready to fly, we changed No. 4 engine, because it had a broken connecting rod.  (The amazing thing is, it was still making lots of power.)  The flight engineer we had helping us said that it was common on those old engines for them to operate with less than all the cylinders working.  They spent a lot of money replacing it, but it made them feel better.  We performed gear swings and steering checks, and found a leaking fitting at the top of the nose gear.

Now usually changing an AN fitting would be a simple 15 minute job.  BUT! This wasn't an AN fitting.  It was an AC fitting. Which is like an AN but with a finer thread.  (They haven't used those since the 1950s.)  So the scramble began trying to find a fitting that by all definition was un-obtainable.  The neat thing about working on such a high-profile project, is that everyone wants to get in on the act.  Turns out there was a guy who had been milling around watching us. He had a shop at the west end of the airport, so I went to see him. I gave him this fitting that was ate up with corrosion, and he starts pawing through aluminum foil trays and says, "Here's one!"  I was shocked.

I then take the fitting back down to the airplane, with him in tow, and he starts looking at the steering actuators that the fitting goes on, and tells me to hold off.  We removed the actuators and he took them to his shop and completely refurbished them both.  He brought them back the next day, all clean and painted.  We installed them and hooked up the hydraulic mule, and NO LEAKS! 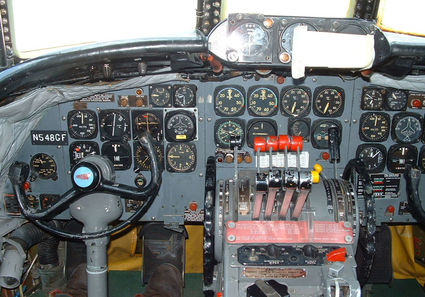 We brought in the flight crew two weeks later and that's when this video was taken.  Unfortunately, the camera angles aren't professional, but at least there is a video out there.

I wish I had taken video of the engine runs we did after everything was completed.  I can't describe the feeling or the sound of standing in front of a large aircraft like this with four massive round engines running at full throttle. It's just something you feel in your soul.  This video unfortunately doesn't give you that incredible feeling, but to witness such a majestic airplane running and moving under her own power after having sat for 16 years is truly awesome.

I really miss working on projects like this where you're working on history. Bringing something back to life that was dead for so long is tremendously gratifying.