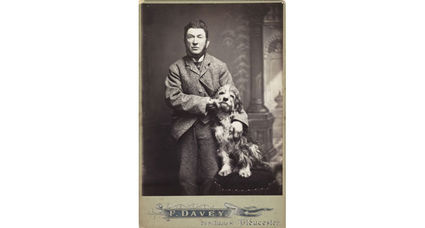 A typical Cabinet Card from the Victorian Era, showing a man and his dog, neither too happy about posing for a photograph.

On July 6, the Tehachapi Museum will be open from 5 to 8 p.m. for the First Friday Art Walk. Along with other downtown venues, the Museum will be offering appetizers, desserts and champagne for guests.

The small exhibit of Victorian cabinet cards featured last month are still on display. The collection was assembled by Bill Reed and all feature men in their finery. The photographs were produced in studios and showcase formal poses of the time. Bill has concentrated on male portraits because of his interest in costuming. The subjects are shown dressed in their finery, showing their well-groomed hairstyles, beards, and moustaches of the time. The exhibit is a tribute to the Fathers of that time period.

The cabinet cards produced at that time were not only of men, but of varied family figures including groups of children, women, babies and even dogs. The photos are mounted on thick cards, sometimes with beveled edges and were meant to be collected and displayed in cabinets. They were introduced in the 1860s. The front of the card is usually printed or embossed with the photographer's details. The popularity of the cabinet card waned around the turn of the century, particularly after the introduction of the photographic postcard, but they were still being produced until the First World War began.

Another continuing exhibit features a colorful collection of insulators that were attached to telegraph and electricity poles. Glass, porcelain and other materials are used because they are non-conducting. The collection on exhibit was collected by Natasha and Evan McTyre and contains some unusual examples, from several inches to almost a foot in height, ranging from porcelain to multicolored glass.

In the Family Case, there is family tree of John Anthony, who emigrated from Greece to Tehachapi in the early 1900s. He and his wife Angie had four children. In addition to family photos, the exhibit includes articles from the Tehachapi Fire Department, of which his son, Tony Anthony, was Fire Chief for 40 years.

Other displays on local history can be viewed, along with the history of the Kawaiisu, the local Native Americans in the Milano Gallery. In addition to First Friday, the Museum and Errea House Museum are open on Fridays, Saturdays and Sundays from noon to 4 p.m. For more information call (661) 822-8152.

First Fridays have become a popular event of fun, refreshments, hospitality and shopping at the participating venues.

Tehachapi Treasure Trove is located at 116 E. Tehachapi Blvd., right across the street from the water tower in Railroad Park. Featuring Daniela Peregrina.

Come join us to meet Daniela, enjoy her work and have some food and wine while listening to Art Larson on clarinet. (See article on this page).

Located at 102 W. Tehachapi Blvd. (across from The Tehachapi Railroad Depot) with a broad variety of items, refreshments and music. Open until 8 p.m.

More than eight local vendors will be available from 5-8 p.m.