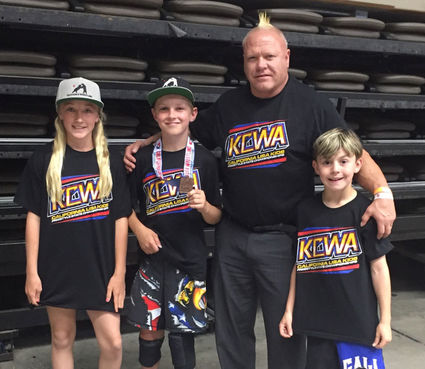 Reese Hart represented TVWC in the Girls Novice 95-pound division and was able to capture one of the prestigious California State Bear trophies with a second place finish.

"Reese has had a great year after taking a couple seasons off, she is a very competitive wrestler and I'm so proud of her," said Coach Curtis Nelson. "We hope Reese will inspire other girls to join wrestling, as the girl wrestling programs in high school and college are the fastest growing sports."

Levi Hart battled his way to the podium, for a 7th place medal in the Schoolboy 87-pound division. Others competing, but falling short of the medal rounds, were Intermediate 63-pounder Kayden Gonzales and first-year wrestler, Troy Martinez, Novice 98-pound division. This year TVWC wrestlers earned a Bear trophy in all three State Championships (Folkstyle-Micheal Murillo, Greco-Roman- Kayden Gonzales, Girls Freestyle- Reese Hart) this accomplishment is a first for TVWC. Many of TVWC wrestlers and coaches will be working on their skills over the summer break at various camps. For more information about TVWC contact Curtis Nelson (661) 557-1366 or come by and visit with them at one of their biggest fundraisers, the 4th of July Beer Garden at Philip Marx Central Park.