The tale of Matty and Mocha 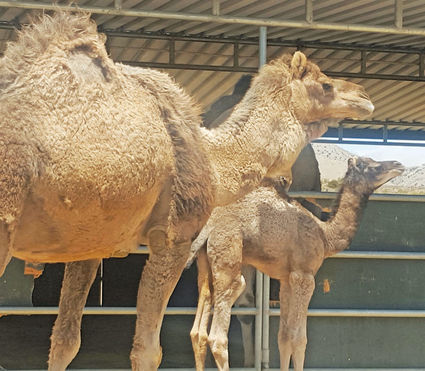 The other day, I was remembering a show called, "When Animals Attack." If you don't remember the show, it was about animal encounters that ended badly, as in animals attacked for no apparent reason and folks got hurt.

What reminded me of this show was our newest camel, Matty, because that is how she was. Well, not actually, but it was the first time in my memory that an animal has taken an immediate dislike to me, so that's how it felt. I've never had such a reaction from any animal.

When Kristina, the gal I bought her from brought her to the ranch, she told me that, "She is a really sweet girl and has never done anything wrong." The reason she was selling her was that she needed the money and Matty had health issues that could get expensive. Her copper levels were extremely low (.43 on a scale where anything under .7 is considered at risk), and she was pregnant. A double whammy. There was no way to be sure the mom or the baby would survive.

A challenge, an education and a chance to help Matty and a camel that, "had never done anything wrong" seemed perfect to me. And it was, until the moment Kristina left and Matty came at me with her mouth wide open, intent on doing me harm. Luckily, I was able to get out of her way. I decided to give her some alone time to get used to her new home, but the next morning when I went out to feed her, the same thing happened. Somewhere in Matty's mind, I reminded her of someone who had done her wrong, and now, she was going to exact her revenge. (Camels are like that. They carry grudges.)

We were just a couple of months from her due date and for now, I didn't have time to deal with the behavior. I needed to focus on the copper and deliver a healthy baby. So, for the next couple of months, I added supplements to her feed. I put copper pipe in her water. I gave her extra mineralized salt. I threw everything I knew against the wall in a gamble to save her and the baby.

For the next weeks, we just kind of danced around each other. I was extra careful to keep out of her reach. It was obvious she hated me.

We estimated her due date to be mid-May, but on April 26, when I did my morning rounds, there on the ground in Matty's stall was the cutest thing you ever saw! We named her Mocha. Little Mocha was on the ground struggling to stand. I wanted to jump in and hug her, but knowing how Matty felt about me, I waited til I had help.

We monitored her the rest of the day, but something felt wrong. Mocha just seemed weak and like she wasn't getting enough milk which made no sense because Matty was engourged. The next morning I pulled Mocha, much to Matty's consternation, and took her to the vet. Collectively, we made the decision to leave her on Mom and watch. We also began milking Matty to give her some relief.

The end of the day on April 28, I was ready to pull Mocha. It seemed obvious that she was getting weaker and I just did not want to gamble. Matty was cushed (lying down) in her stall with Mocha next to her. I climbed in and sat next to Mocha hoping Matty wouldn't come after me. To my surprise, she didn't get up when I approached. I sat there quietly waiting til I was sure Matty wasn't going to come after me, then I told her, "Your little one is not doing well Matty. I am going to need to take her from you. I just don't want to lose her."

Matty looked at me and a tear rolled down her cheek. Then another. Soon we were both crying and Matty put her head on my shoulder. I couldn't take her baby. In that moment, I knew she and I had made a deal. One more night with Mocha. One more night to get it right. I walked away that night not sure I was doing the right thing. Not sure if Mocha would make it. 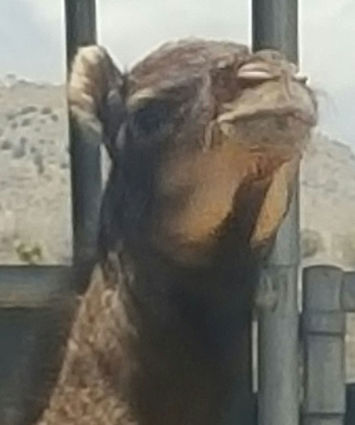 The next morning, Mocha was on her feet nursing! Matty walked straight over to me and put her head on my shoulder. Somehow, through all the struggle, the health issues, and now this little miracle baby camel, Matty had come to realize that I was on her side. We have forged a friendship that is built on mutual respect and a bond between two beings that love one little girl named Mocha.

Mocha is growing fast, so if you have not had a chance to encounter a baby camel, now is your chance. We are open Saturdays from 10 to 4 p.m. until the end of October. Mocha took her first carrot just last Saturday. Maybe you will be lucky enough to give her her second.