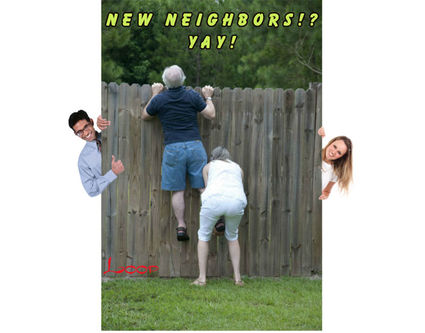 James and Kathy Govereau moved into their new Bear Valley home in April. They moved here from Broomfield, Colorado, a little town just north of Denver. They had lived there for 12 years after spending many years living in Las Vegas. Kathy said that they won an opportunity trip to Colorado, went for a vacation and loved it so much that they moved there. However, most of Kathy's family has lived in Tehachapi for many years and she and James had been coming here to visit three or four times a year. When her mom fell and broke her shoulder, she said both she and James felt it was time to move closer. Now her parents live only a few minutes away.

Kathy grew up in Lakewood, California. She has a sister who also lives in Bear Valley. Her family has been well-known in Tehachapi for many years. Her aunt and uncle own Roberts Family Farms. Her father, Steve Roberts, heads the condo owners association in Bear Valley Springs and her uncle, Tom Roberts, was active in the Tehachapi Masonic Lodge before he passed away. James grew up in Yorba Linda and has a brother in Huntington Beach. He and Kathy met in a bar at Marina Pacifica in Long Beach, laughs Kathy. James asked her to dance and then asked her out. She agreed to meet him only for coffee and the rest is history.

James is a union carpenter and has been working in Northern California. Kathy said he is hoping to find something closer to home soon. Kathy spent many years as a hair designer before becoming a realtor in Colorado. Here in Tehachapi, she is assisting Realtor Theresa Mann. She has three adult children, twin boys and a daughter, as well as three grandchildren.

Kathy said that both she and James like to fish, hike and go wine tasting. They have definitely moved to the right place for those activities.

Welcome to Tehachapi Kathy and James.

Matt and Brianna Darwin moved to Tehachapi in April when the owner of their rental house in Palmdale notified them that the house was to be sold and they had 30 days to move. They had always wanted to move to Tehachapi so they began looking for rentals. It seemed like nothing was available until Brianna was checking out Zillow and found the house in Bear Valley Springs. They took the house sight-unseen and it will do just fine until they get around to buying a home.

Matt is a commercial solar electrician in the Antelope Valley. Anyone who has traveled near Avenue I and 110th Street West has seen the project in which Matt is involved. Brianna is a rehab nurse and drug and alcohol detox counselor who will eventually be job hunting once their household is settled. In the meantime, she is getting acquainted with her new house as well as coping with five of their seven children trying to finish the school year in schools they have only attended for three months.

Brianna was born in Bishop, California and is a self-admitted country girl. She has always loved country living which is why Tehachapi appealed to her. She said she left Bishop at the age of four but returned for a bit in 2002. Matt was born at Glendale Adventist Hospital. He and Brianna met at church. Between them, they have seven children and two grandchildren. Five of them are still at home. Matthew will be graduating from Tehachapi High School this year and Jaymie, who is home schooled, will be graduating 8th grade. Twelve year old Julianna and seven year old twins Jaycie and Jackson just can't wait for school to be over. Brianna said that young Matthew is interested in joining the Air Force as a fireman or going to college to study fire science.

Rounding out the family are their two dogs, big Max and little Ivy.

Welcome to Tehachapi Matt, Brianna and family. We know you will soon have time to explore your new hometown.