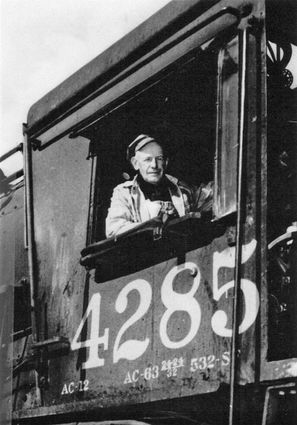 Hubert Porter (Olie) Oldham who operated a S.P. Mallet Steam Engine for 41 years (1904-45) over the Tehachapi Mountains, as well as north through San Joaquin Valley.

I knew one of the steam locomotive engineers whose usual run brought him from Bakersfield up and over the Loop, through the Tehachapis and down to the desert area. They called him "Olie" (O-lee) but his official name was Hubert Porter Oldham. He worked for the Southern Pacific Railroad out of Bakersfield as an engineer for 44 years; from 1904 until 1948. The term "hoghead" was given to the steam locomotive engineers of that time and was sort of a status symbol as were the pinstripe overalls and hat. Olie, a tall, lean man, had a voice that could be heard clearly for an easy half-block as he had learned to pitch it so his fireman could hear him over the roar of the steam engine he was operating. Somehow, though, the voice had a beautiful resonance that was pleasing to the ear in spite of the volume. His wife, Ethel, said the family had no secrets from the neighbors for they could hear everything he said.

The seasoned old engineer knew exactly how to handle the occasional wheel slipping on the Tehachapi grade by the use of sand applied to the tracks. When I used to ride the train home from Bakersfield I would sometimes hear a funny, rapid "chuffing" sound. I never knew what it was until one day I asked and was told it was the wheels slipping on the tracks and the sand being applied. (Wow, I had to ask!) In the days before two-way radios, cell phones and computers, the engineers had a code system of whistles to signal to the trainmen on board. The conductor, who handled all of the paperwork back in the caboose, relied greatly on these whistle signals. Olie's methodical and exact handling of his Mallet (pronounced Malley) steam engine kept him accident free his entire career.

A stop was needed at Woodford (Keene) and again at Tehachapi for water and oil for the steam engine. This allowed Oldham and his fireman time to step across the street to Squires Café (now, Kelcy's Cafe location) for a cup of coffee. In the mid-1940s, I often worked the early shift at the telephone office and stopped by the restaurant about 6 a.m. for my morning coffee. I could hear Mr. Oldham's basso profundo-like voice even before entering the building. His granddaughter, Anna Phillips Toy, and I, were friends so he would recognize me and we would exchange a few words.

There was an incident that occurred on a Friday the 13th that kept him leery of that day for the rest of his life. It seems that only once did he fail to personally read the orders for his run. That one time his fireman picked up the orders and read them to Olie, but in the process mis-read them. This error almost caused a bad accident and was averted only when Oldham realized something didn't seem quite right. After that he trusted only his own eyesight and reading ability.

One other life/death situation entered into Oldham's career when he was scheduled to take the Bakersfield-Fresno run, but called into the extra board for a substitute so he and Ethel could attend a family wedding. Later in the day, on that very run, a gasoline truck stalled on the crossing at Kingsburg and exploded after being struck by the train, tragically causing both the substitute engineer and fireman to be killed. His granddaughter said he felt guilty about the incident for the rest of his life for the engineer had been a young family man.

Mr. Oldham was born on Dec. 7, 1884 in Bowling Green, Kentucky where his parents had a large plantation. After attending Normal School (an old-fashioned word for college) he was diagnosed with a weakened lung condition and was advised by his doctors to seek a drier climate. This found him traveling to California. During this time, at the turn of the twentieth century, he met Ethel McCutcheon of Springville, California. She was a direct descendant of the McCutcheon's who were survivors of the Donner Party.

The couple hit it off grandly, so when Oldham had to return to his native Kentucky, Ethel wrote him a letter saying how lovely the warm California sunshine was and how she wished he was here to enjoy it. She was on her way to mail the letter when the stage rolled into Springville with Olie aboard. That day, however, there was no sunshine as it was pouring down rain.

His employment with the Southern Pacific Railroad began in Bakersfield in 1904 when he was just 20 and in April 1905 he and Ethel were wed and lived the rest of their married life in a charming frame house on Quincy Street.

Olie never learned to drive an automobile; unusual for that day and age. His one experience operating a car found him ending up in a cotton field. He decided the only thing he would operate was his Mallet engine. His wife drove him where he needed to go and he came along as a contented passenger. He was not a heavy drinker but upon arriving home from a run he would take a single drink of Old Crow whiskey to, "get the tunnel smoke out of his lungs."

Hubert Porter Oldham was, as were many old locomotive engineers, a legend in his own time and a nearly forgotten page in the annals of vintage trainmen.