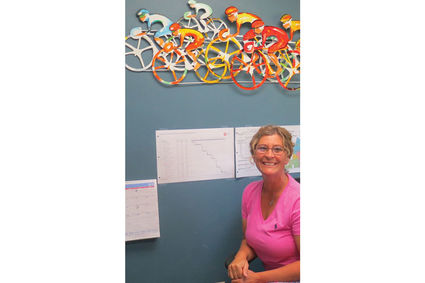 The Tehachapi Valley Recreation and Park District survey taken to gather public response to a proposed general obligation bond found that the crucial threshold of 2/3 "yes" votes may be attainable. T

The survey company recommended that the district consider placing a bond measure on the Nov. 2018 ballot.

The Rec & Park board of directors would need to pass a resolution by Aug. 10 to qualify for the Nov. 6 ballot.

The final tally of "yes" responses in the 400-person survey was 63.5 percent, with 3 percent more "leaning yes," 2.8 percent "undecided." (See graphics, right).The "yes" responses increased from 58 percent after responders answered questions about facility and program options that could be available should a bond pass.

"You need 66.7 percent to pass, out of the gate. "It's a little low," Bryan Moore of the survey company Isom Advisors said during his presentation at the May 15 Rec & Park board of directors meeting.

Rec & Park Manager Michelle Vance said that people want to know what the proposed aquatic and community center will look like before they commit.

Some members of the community are firmly opposed to new taxes, as evidenced by the percentage of "no" responses to the survey and stickers that appeared on workshop posters, "No new taxes."

Tehachapi City Manager Greg Garrett was optimistic about the survey results. "I think 58 percent is good. The numbers are not so low," he said, noting that proponents have several months to acquaint the community with the proposal. 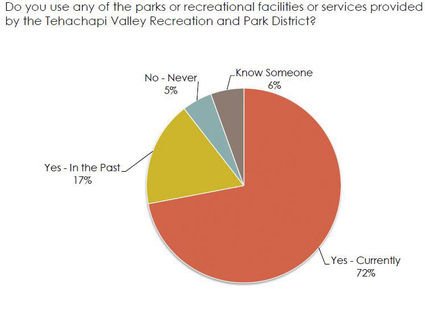 SURVEY QUESTION: Do you use any of the parks or recreational facilities or services provided by the Tehachapi Valley Recreation and Park district?

In addition to a bond measure, the district is studying the feasibility of a Landscape and Lighting District parcel tax that would require a 50 percent approval to pass. The eight-year flat-fee parcel tax would support maintenance of the district's facilities, whereas the bond, in the sum of $43 million, would be used for capital improvements.

To fund both its programs and facilities, the district annually receives $17 per $100,000 of assessed valuation on 16,969 properties, totalling $873,000 a year from all property owners.

"The (program) fees should be used to pay lifeguards, not for heating the pool," Vance said. With fees going to maintain the infrastructure instead of paying for employees, shirts, balls and lights, "the only people [who will be using the facilities] are the ones who can afford it. Recreation is not about that. We need to touch those who can't afford it."

Join us as we take the journey to improve recreation for children, families and senior citizens.