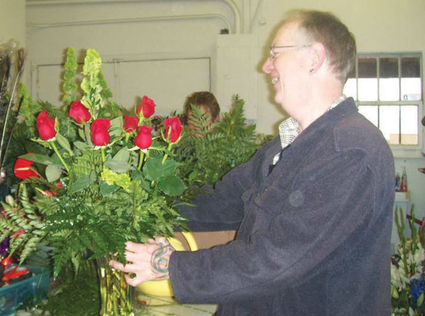 Dave is well versed in the various aspects of the floral business of today and still has a passion for what he does. "You really have to love it," says Dave.

He went on to work at the Sahara Village Florist, one of the largest flower shops in Las Vegas, where he cut his teeth in retail.

Throughout the 80s Dave honed his retail skills and went to work for a grower in Carpinteria where he learned the many facets of that end of the business. Dave and his wife also opened and operated their own successful retail store in Santa Maria called Country Club Flowers.

Every opportunity and every experience came with more understanding of this ancient art and concepts of its modern demands.

In the early 90s Dave was back in Las Vegas and went to work for the MGM that had opened the first hotel-owned flower shop. His artistry for the MGM was bestowed upon by some of the biggest entertainment stars of our time. His floral designs were appreciated by Barbra Streisand, Red Skelton, Lucille Ball, among others. He also provided arrangements for Frank Sinatra's 40th Anniversary in show business extravaganza held at Caesar's Palace.

In 2000 Dave moved to Salt Lake where he worked in the bouquet business making arrangements for big league supermarkets such as Sam's Club, Albertsons, and Smith's Groceries. By 2003 he was back in Las Vegas and working for Mayesh Wholesale Florists where he worked his way up to assistant manager.

In 2011 Dave joined the staff of Tehachapi Flower Shop/Downtown Yogurt Junction as head designer. "His years of experience was truly an asset," says owner Kandi Smith. Kandi loves the new style and experience he has brought with him. His knowledge about all flowers and plants, care and designing, which was massive, encouraged all to step up their game.

While his seven years were too short and gone too fast for Kandi, their friendship will continue. She knows his experience and knowledge, his trustworthiness and honesty will not be easy to replace.

"Tehachapi Flower Shop will always be grateful for the success he brought, and wish him the best. Praying for him always that he has a relaxed and joy-filled retirement," Kandi told us.

Please drop by Tehachapi Flower Shop, 117 E. F Street and wish him well, and sign a card at Yogurt Junction when he isn't there. Dave's last day is sometime in June. It isn't goodbye, we hope to see him strolling around our town of Tehachapi. "Until we meet again."