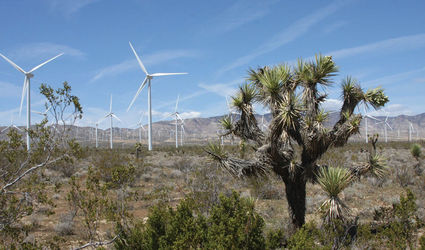 Iowa leads the wind energy parade, with 36.9 percent of its power emanating from wind turbines dotted throughout the rural landscape.

Kansas is next, with 36.0 percent of its power coming from the turbines, followed by Oklahoma with 31.9 percent and South Dakota with 30.1 percent.

Fourteen states derived more than 10 percent of their energy needs from the wind.

Wind energy supplies 6.3 percent of power in the United States as a whole. California, which has surpassed the United Kingdom as the fifth largest economy in the world, derives 6.8 percent of its power from wind turbines.

Wind energy poured 254 million megawatt-hours of electricity into the U.S. grid in 2017, the annual report said. 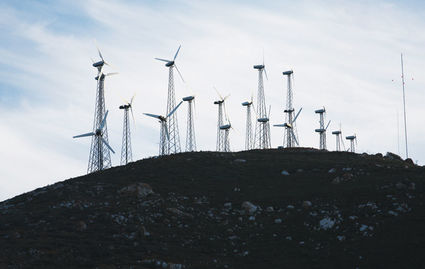 Tehachapi, with its magnificent winds rushing over the Tehachapi Mountains from the Central Valley to the Mojave Desert, was the birthplace of wind energy in California. Some older turbines (above) visible along Tehachapi-Willow Springs Road and Hwy 58, are still producing.

The data underscores the growth of wind energy, which supplied less than 1 percent of U.S. power in 1990.

Jobs in the wind industry now top 105,500, including hundreds employed by Tehachapi's own World Wind and Solar, which services wind turbines and solar installations.

China leads the world in building new wind power installations, with 19,500 combined onshore and offshore new turbines in 2017. The United States wind power capacity grew by 13 percent in 2017, with 7,017 onshore installations. In Germany and the UK (third and fifth in growth), a high percentage of new installations were offshore, with almost half of those in the UK built offshore.

"Projects built in the last three years are achieving annual capacity factors above 40 percent, on average, compared to 35 percent or less for older vintages," the report Executive Summary said. "A typical new turbine is now capable of powering the equivalent of 750 American homes." 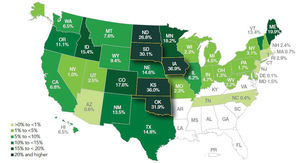