What does the Swiss bobsled team and the PCT have in common? Hummingbird! 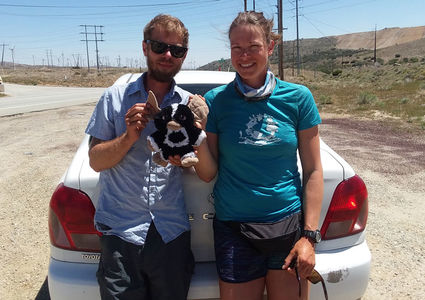 In late April, I gave two PCT hikers a ride from the post office back to the Best Western and agreed to take them out to the Willow Springs PCT intersection the next day at noon.

Hummingbird, her trail name, is from Switzerland and had started hiking from the Southern Terminus, near El Campo, Calif., and after she had been on the trail about an hour, a young man from New Mexico, whose trail name is Campfire, caught up to her and they have been hiking together since.

After dropping them off at the Best Western I went home and studied a little about the languages. I was interested because Hummingbird's English was so good. I found out there are four national languages in Switzerland. German, French, Italian and Romansh.

As I was taking them back out to the trail, I asked Hummingbird what languages she knew. She knows German, Swiss German, French and English – smart girl! She left a job in banking to hit the trail.

Hummingbird was a pusher on a two-man bobsled team for Switzerland and competed in the U.S.

Campfire is a young man from New Mexico who waited tables and held other jobs to save up to hit the trail.

As I drove them out I asked them about the hospitality they had received in Tehachapi. Hummerbird said we did a great job giving rides in town and she said her trust in the goodness of people was being revived.

In the picture between Hummerbird and Campfire is Hawk who travels with Granpa Butterscotch in search of hikers.

If you see a hiker, ask them how you can help them.