This year marked the 76th Anniversary of the Doolittle Raiders 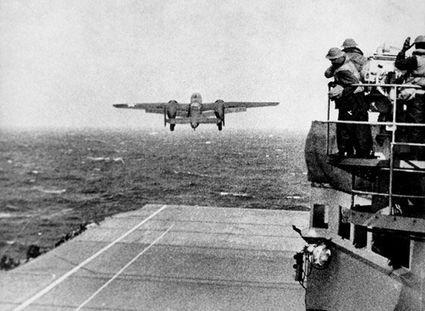 Doolittle's plane leaves the deck of the USS Hornet.

Morale in America was low after the attack on Pearl Harbor on December 7, 1941 and something needed to be done to raise the spirits of the people who found themselves plunged into World War II.

A U.S. Naval Submarine Officer was thinking way outside of the box when he proposed having land-based aircraft fly off of a Navy aircraft carrier and strike back at Japan. At the time, Chief of Naval Operations, Ernest J. King, had an unusual, but strategic vision that the Japanese were so focused and rigid in their own planning, that they were totally susceptible to a diversionary attack by the Americans.

It was a dramatic saga of a combined Army and Navy mission that brought panic to Japan and stirred the emotions of the world for its brilliance and daring. The mission that was developed was kept secret from everyone, including the pilots and crews who had volunteered for the incredible mission. It was 76 years ago on April 18 that one of the most celebrated bomber strikes of the Second World War was carried out in the Pacific – The Doolittle Raid.

Named for the mission's commander, Lt. Col. James "Jimmy" Doolittle, the attack had 16 twin-engine B-25 Mitchell bombers take off from the carrier USS Hornet in broad daylight and strike targets in and around the Japanese capital of Tokyo.

In very heavy seas, 800 miles off the coast of Japan, enemy patrol boats were spotted and sunk by the U.S. Navy. The crew of the Hornet feared Tokyo had been warned by radio, so Doolittle gave the order to launch the raid ten hours early. Only one hour notice was given to the pilots and crews to launch.

Never before had land based Army bombers fully loaded been launched from a carrier at sea. Even though the planes had been stripped of everything heavy and non-essential to the mission, including the guns in the tail of the aircraft, they were heavy laden with bombs.

Doolittle, the Commander of the mission, took off first with the shortest distance for takeoff. Every plane made a successful takeoff, even though the weather worsened and the seas were tossing the carrier around.

Target objectives were carefully pre-arranged for each aircraft. At high Noon, over and near Tokyo, bombs fell.

In 2008, my husband Al and I had the pleasure of meeting Major Tom Griffin, through our friend Jonna Doolittle Hoppes, grand-daughter of Gen. Jimmy Doolittle. Major Griffin gave a talk at the Los Angeles Explorer's Club about the famous Doolittle Raid and we were invited to attend.

Griffin was among 80 volunteers for the April 18, 1942 mission. The bombing run, planned by Lt. Col. Jimmy Doolittle, was credited with lifting American morale and shaking Japan in Pearl Harbor's aftermath. The B-25 bomber Tom flew over Tokyo carried the name, "Whirling Dervish".

"We needed to hit back," Griffin said. The Raiders trained for the attack at Ft. Walton Beach, Florida.

Eight Raiders were captured, and three were executed. A fourth died in captivity. Villagers suspected of hiding the Americans also were executed.

"We had a lot of near-misses, when they (Japanese soldiers) raided places we had been the night before," recalled Griffin, who had parachuted into a tree without major injury. Three Raiders died off China after the raid.

Griffin had joked that he hoped to be one of the last two surviving Raiders who would share the final toast in a small gathering, which had been the plan for decades. They would drink from a bottle of 1896 cognac, the year their commander Lt. Col. "Jimmy" Doolittle was born.

Griffin was a native of Green Bay, Wis., who settled in the Cincinnati area after the war and had an accounting business.

After the Tokyo Raid, he served as navigator in North Africa until his aircraft was shot down and he was captured by the Germans on July 3, 1943.  Griffin remained a POW until his release in April, 1945.

Jonna Doolittle Hoppes wrote the book "Calculated Risk: The Extraordinary Life of Jimmy Doolittle", about her famous grandfather and the daring raid on Japan. 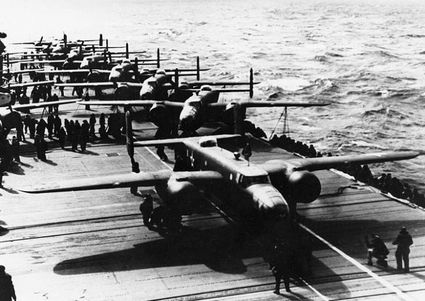 Jonna said that her grandfather was blessed with an analytical mind and most of his "stunts" were the result of careful study and planning. He was the master of the calculated risk.

There were those who claim that the Tokyo Raid was a suicide mission. Hoppes said, "This is not true. Although it was dangerous, the planning and execution of the Raid were based on calculation and study. Every man on that mission had reason to believe that he had a good chance of returning home safely. The Tokyo Raid was a calculated risk."