Children and staff members of Ninos de la Promesa and Rotary members pose for a group photo on the new turf.

The main goal of this trip was to install new artificial turf, which was purchased by the Rotary Clubs for the children to use for sports and other activities. Previously the orphanage had a smaller area of artificial turf that was pieced together from many scraps and was badly worn. Installation of the new 30 by 60 foot area was completed during the first day of the trip. The children and staff members showed a lot of enthusiasm as they began to use the new turf. 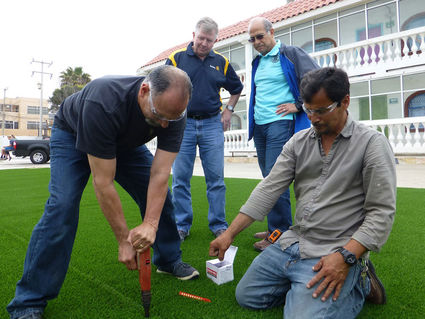 Before this trip, many members of the two Rotary Clubs accumulated a carload of items for the children, such as toiletries, backpacks, toys, clothes, and school supplies. These items were brought to the orphanage by the three travelers. Also, additional items were purchased in Tijuana for the orphanage during the trip, including shower curtains, dishes for the kitchen, hairbrushes and hair trimmers. A new set of outdoor furniture is also being purchased by Rotary for the orphanage.

Ninos de la Promesa provides a safe, structured environment for about 40-60 children, many of whom were abandoned in Tijuana's red light districts. Rotary has provided support to Ninos de la Promesa for many years by providing clothes, food, supplies, musical instruments, appliances, passenger vans, and other needed items. Members of the Tehachapi Rotary Club and other Rotary Clubs travel to the orphanage twice a year to deliver much needed supplies and assist with various projects.