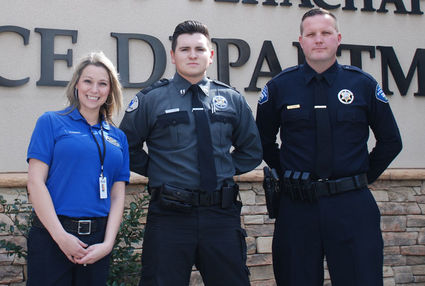 On April 18, the Tehachapi Police Foundation announced the names of their 2018 honorees. The four will be honored on Thursday evening, May 17, at the second annual Honoring the Thin Blue Line banquet to be held at Rose Garden Estate in Cummings Valley.

The Tehachapi Police Foundation, a 501(c)3 tax exempt non-profit corporation, was formed in 2016 as a means to receive grants and raise funds to be used for the department's nonbudgeted items. "It is a great way to build a bridge between the community and the police department," said Foundation Vice President Kim Nixon. 2017 was the first event to honor the police officers and staff of the Tehachapi Police Department. Last year the Foundation was the recipient of a generous donation from Cheers to Charity and this year the Foundation plans to present the first Jacob Langston Scholarship named for the Police Explorer who was killed in a boating accident at June Lake in 2016.

Last year's honorees were chosen primarily by their supervisors; however, this year they have been chosen by their peers making the award a double honor.

The 2018 Officer of the Year is Mike Adams who has been with the Tehachapi Police Department for six years. Before attending the police academy and joining TPD, Mike was an EMT with Hall Ambulance. Trained as a field officer, Mike said that with the adoption of such statutes as Proposition 47, which turns a number of felonies into misdemeanors, in many cases "our job is to be the consequences and we may be the only jail time they see." He added that if possible he would always prefer to give a warning.

Police Dispatcher Lindsay Booth was chosen Civilian Employee of the Year. Coming from Bakersfield, where she worked for a neurosurgeon, Booth joined dispatch when it was formed in 2016. She now also spends two days a week managing the property and evidence locker. She said that she has taken some of the most critical calls, one from an elderly woman who was having a heart attack and couldn't respond to her questions. She was able to find the woman in 15 minutes by "pinging" her phone. "It's really nice to know that your peers appreciate you," said Booth.

The Explorer of the Year is Caymen Aguirre who joined the Explorers in 2013. Aguirre is Captain of the Explorer Post and said that he has set his sights on joining either the Los Angeles Police Department or the LA County Sheriff. It is his responsibility to plan the Explorer programs and what events and classes will be presented. "He runs the program," said Officer Mike Adams. Aguirre will be part of the Honor Guard at the May 17 Foundation event.

The Volunteer of the Year is Mark Machanic. Machanic works as a full time dispatcher and then volunteers another 30-40 hours a week as a Reserve Detective. He is a retired Detective Sergeant who spent 36 years with the Los Angeles County Sheriff Department and who has lived in Tehachapi for eight years. He joined TPD Dispatch two years ago. In May he will have been a Reserve Detective for 15 months. As a Reserve Detective he investigates high profile theft, forgery, fraud and sex crimes. He also provides assistance and guidance to other TPD officers. "I'm honored that my peers feel my work deserves this recognition," said Machanic.