The court-ordered realignment of the five Kern County Supervisor districts to create a second Hispanic-majority voting bloc has produced an expanded District 2 that is the size of a small kingdom.

Tehachapi resident Zack Scriver represents District 2, which will lose portions of its area to other districts while expanding across the entire lower half of Kern County from the San Bernardino County line to the San Luis Obispo County line. Beginning with the Nov. 6, 2018 election, the District 2 supervisor will be responsible for the Los Angeles County-adjacent growth areas of the I-5 corridor at Grapevine and Frazier Park, as well as the oil and farming communities of Taft and Maricopa. On the east side, the Dist. 2 supervisor's territory, as it currently does, will extend to the San Bernardino County line just past Boron.

The Kern County Board of Supervisors voted 4-0 on March 30, 2018 to accept a settlement of a Mexican-American Legal Defense and Educational Fund (MALDEF)-generated 2016 lawsuit, Luna et. al v. Kern et. al, which named the county, the five supervisors and Kern County Registrar of Voters Mary Bedard as defendants. In its lawsuit, the plaintiffs asserted that the existing supervisor boundaries violate the 1965 Voting Rights Act because "the County's 2011 redistricting plan impermissibly dilutes the Latino vote in Kern County and thereby denies Latinos the opportunity to elect representatives of their choice."

Scrivner, speaking at the April 4 Greater Tehachapi Economic Development Council meeting at Slice of Life Enrichment School, said the plaintiffs originally wanted one supervisor to represent all the residents east of the mountains and four supervisors to represent the west side.

"It would have diluted our voting strength," Scrivner said.

The supervisors fought to keep two representatives on the east side, and ultimately the parties agreed on that issue at a March 28 settlement conference in Bakersfield with Magistrate Judge Jennifer L. Thurston.

Fresno-based Judge Dale A. Drozd of the U.S. District Court Eastern District presided over the lawsuit from the beginning.

"We were pleased with the settlement," Scrivner said. "It preserves two East Kern districts."

He said the supervisors were correct to reach a settlement rather than appeal to the 9th Circuit Court.

Fourth District Supervisor David Couch loses the most in the realignment, much of it to Scrivner. Couch, who disagreed with the process, abstained at the final vote on the settlement. 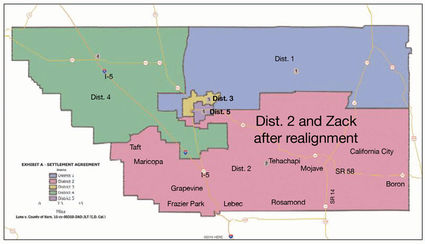 Under the settlement, the 2011 districting plan can never again be used for a seat on the Board of Supervisors. The settlement orders that elections through 2020 must adhere to the map [see graphic this page]. The individual defendants – who were sued "in his or her official capacity only" -- were dismissed under the settlement and the county will pay the plaintiffs $3 million "in full and complete satisfaction of any and all claims they may have" for expenses.

In November, elections will be held in districts 2, 3 and 4.

With the realignment, Scrivner said, 120,000 residents of the county will have new supervisors. Scrivner's territory in the 2nd District covers 3,700 square miles, which is 44 percent of the geographic area of Kern County.

The same assertion of Hispanic vote dilution compelled the Tehachapi City Council, under threat of litigation, on Dec. 4, 2017 to switch from at-large elections to district-based elections, in which one councilperson represents one district.