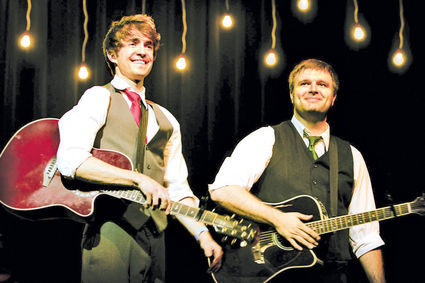 The "Folk-Rock" duo Ryanhood will be performing in Fiddlers Crossing on April 27. The concert was originally scheduled for February but had to be cancelled at the last minute due to illness. The musicians are healthy now and will soon be heading to Tehachapi. The show was nearly sold out for February, and those holding tickets may use them for this later date. Because not everyone was able to make the date, some tickets have become available and may be purchased online at fiddlerscrossing.com or at the Tehachapi Treasure Trove. But don't delay! There are only a few tickets left and they will go quickly.

Ryanhood is composed of two former rockers, Ryan Green and Cameron Hood. They were named "Best Group/Duo" in the 2014 International Acoustic Music Awards (IAMAs). The two met in high school where they had a respectful rivalry between their two rock bands. Green's impressive guitar chops earned him a scholarship to Boston's prestigious Berklee College of Music. Hood stayed behind to study art at the University of Arizona. After graduation, Hood moved to Boston to join Green where they became full-time street performers.

They were soon discovered by a college concert recruiter and quickly became one of the most popular bands on the circuit, playing upwards of 130 college dates a year. Hood's rich and folky lead vocals, Green's explosive guitar and mandolin riffs, and their airtight vocal harmonies prompted the Idaho State Journal to call them, "this generation's new mix of Simon & Garfunkel, America and U2."

Now, with their star continuing to rise, they have maintained their intimate storytelling and acoustic guitar interplay that was a hallmark of their early work as buskers.

They currently reside in their hometown of Tucson, AZ, where they have won more than a dozen Tucson Music Awards including "Best Folk Band" and as well as "Best Rock Band."

Fiddlers Crossing is at 206 East F Street at Robinson Street, in Downtown Tehachapi. Tickets may be purchased next door at Mountain Music, at Tehachapi Treasure Trove, or online through Fiddlerscrossing.com. Tickets to the concert are $20, and as always, coffee and goodies are included. The concert begins at 7 p.m. Doors open at 6:30 p.m.