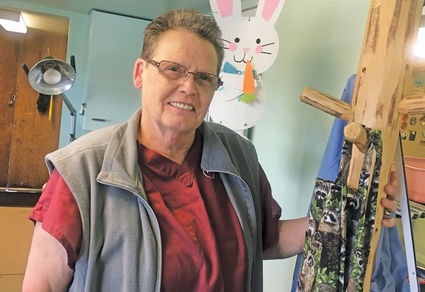 Many people relocate to Tehachapi for the beautiful nature and proximity to the creatures who live here. It's amazing to live in a town where deer, birds, raccoons and wildcats casually roam through your yard.

Sue Hammer, the founder of Tehachapi Wildlife Rehab and Education, said this desire to be close to nature too often comes with a lack of understanding and compassion for local wildlife.

"They were here first, they didn't do anything. We moved in, we didn't pay them for their land, we've torn everything up, we've put up houses, then you call me and say, 'come get this stupid animal.' So I ask, 'why the hell did you move here?' And they say, 'oh because of the beauty and I wanted to watch animals.' Hello? No...It's a me, me, me society," Hammer said.

Hammer began the federally and state licensed Tehachapi Wildlife Rehab about 10 years ago. At that time, it operated out of her living room.

"It's really fun when people go and open your refrigerator and there is a mouse laying there because I'm ready to feed something," Hammer said. "If you're a rehab, you get used to that."

The new clinic, while still on her property, no longer shares her living space and has its own mouse-dedicated refrigerator. Refurbishments and finishing touches are still being made, but Hammer hopes to have an open house within the next couple of months. Typically, the clinic is not open to the public.

While the rehab is relatively new in Tehachapi, animal rehabilitation has been a lifelong passion for Hammer. Her interest began 50 years ago when she began self-teaching herself about wildlife.

"I could have been a vet, but I'll be honest with you, back in the day, we were supposed to be barefoot and pregnant and the veterinarians at that time were men," Hammer said. "If you look at the population now, it is mostly women. We do it out of our heart. We aren't going to be Rockafellers by any means, but if we can help the animal, that is what it's all about."

Hammer started working on her veterinarian technician degree in 1994, after retiring as a peace officer.

"I will tell you my story. I have gone from one animal to another and some of these are better behaved than the ones I used to put in their cages at night," Hammer said.

Similar to the new space in Tehachapi, Hammer designed and operated a wildlife rehab center in Northern California.

Christina Kulesza, a volunteer at Tehachapi Wildlife Rehab, said about 95 percent of the animals that come into rehab are there because of something humans have done to injure them.

Outside of the physical rehabilitation work, Hammer and Kulesza work to educate the public and promote more mindful practices when dealing with nature. Starting with an understanding of the seasons and what they mean for wildlife.

Hammer continued, "Spring is growth, fall is the end of the season. Fall your trees in fall and when spring comes, look before you cut," Hammer said.

Hammer and Kulesza simply want to see more people using common sense when it comes to wildlife. This work, while all consuming at times, is very rewarding.

"There is nothing more enjoyable than to take something out that you've worked with and release it. [The rehabilitated animals] get halfway out there and stop and they turn around and look at you," Hammer said.

The rehab business is a pricy one. When Hammer was caring for 15 great horned baby owls and 10 barn owls, the bill was $8,000 just to supply mice to the hungry babies.

Tehachapi Wildlife Rehab always appreciates donations. If you're interested in helping these hometown animal heroes, you can send monetary donations to:

See you next time!