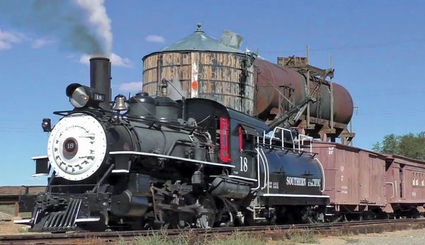 Engine #18 steams along once again at the Laws Railroad Museum. See more images of the Slim Princess at www.OwensValleyHistory.com/carson_n_colorado/page50.html

During the past sixty years or so, driving south down Highway 395 from the Bishop area, one would have noticed a steam locomotive on the west side of the main street going through Independence, Calif. It had been placed there in 1955 after having been taken out of active duty to become an exhibit for people to stop and examine and have a picture taken alongside. The engine, always called the Slim Princess, Locomotive #18, of the Carson & Colorado Railroad and later the Southern Pacific, had led her train over narrow gauge tracks from Keeler north to Mina, Nevada for many years. Finally, in 1955 she had been put to sleep; her headlight eye darkened for many decades. Her narrow three foot gauge tracks also were soon to be eliminated entirely throughout the Owens Valley. An era had come to an end.

A few years back when passing through Independence, we noticed the long standing roadside icon was missing. This piqued our curiosity until finally my son Tom Gracey, who lives in Independence, revealed that he had been helping a crew of men build a two-stall engine house for Locomotive #18, the Slim Princess, which had recently been brought back to life and awakened from her 62 year sleep.

On a Sunday afternoon, not long ago, driving south from Bishop with family after a visit with son, Fr. John Gracey, we stopped in Independence to visit son, Tom. He had asked us to meet him at the Eastern California Museum. The Baldwin 4-6-0, Engine #18, the Slim Princess, was already there; a resident in her new home, the handsome, two-stall engine house. The four occupants of our south bound car-my son, Jim Gracey and his wife, Teri, plus grandson, Dakota Gracey and myself, were fascinated by the newly awakened Princess. Dakota, a pro-bicycle racer, a Harley rider and a life time train buff was allowed to climb into the giant locomotive as did his dad, Jim. Teri and I merely observed.

Dave Mull, President of the Board of Directors for the Carson & Colorado Railway Society was there with Tom. He filled us in on the beginning of the resurrection of the old engine. Apparently a man had come into his auto parts store (in Lone Pine) looking for a grease fitting for the connecting rod belonging to the Slim Princess. Dave said that started the ball rolling. In a short while the Carson & Colorado Railway Society was founded and a campaign begun for the awakening of the Princess. A prerequisite for the planned action was to move the heavy lady (a mere 44 ton) from her home of 62 years by means of a very large tow truck and a very, very large trailer. After building a rail up to the trailer, they winched the locomotive, "slowly and carefully," up the ramp and onto the big trailer. After chaining her down she was taken down Highway 395 to her new home at the Eastern California Museum in Independence, where her "resurrection" would begin.

Paraphrasing Dave Mull: "What a year they had in the Owens Valley!" A restored operational narrow gauge steam locomotive and a two-stall engine house with a roof on it. There was 300 foot of narrow gauge to run the Princess on. She had moved from her 62 years in solitary confinement to the new Larry Peckham Memorial Engine House on June 9, 2017. It had been built just for "her".

After the unloading, they built rail into the engine house to join the tender they had moved in earlier.

All of this culminated at high noon on July 3, 2017 at a "Silver Spike Ceremony" with the old girl moving under her own power to the delight of the large crowd assembled as they watch Dave Mull drive the silver spike home. Quoting Dave, "After fueling and filling the old girl with a few thousand gallons of water, she was ready for the test run." The crew was there to bring the "lady" up to pressure for her debut.

By September of that year they were making plans to let the Princess visit the Railroad Museum at Laws, which was, at one time, a regular stop for the Princess. Laws narrow gauge rails offered her an opportunity to "stretch her legs." She was able to travel, once again, on familiar narrow gauge track from her regular run many years ago. The old locomotive pulled rail fans throughout the day on September 23, 2017, whistle and bell sounding. It was a wonderful payoff for the volunteers who restored her. After that weekend, however, she was taken back "home" to the proud community of Independence 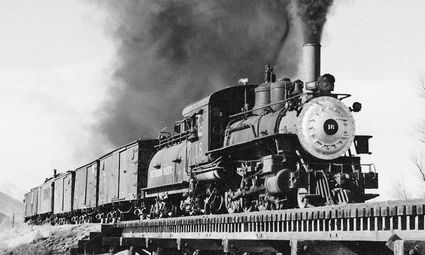 SPNG #18 cruising over the Owens River with a train of high cars.

Laws would have liked for her to stay for good but Independence folk permanently claimed her for their very own.

This little piece doesn't even scratch the surface of information about the history of the narrow gauge railroad that once traveled the Owens Valley. Grandson, Dakota and I have tried to present some interesting facts but they are only a fraction of the story. The Slim Princess was "born" in 1911 by the Baldwin Locomotive Works of Philadelphia, Serial #37395. Weight -44 tons, Boiler Pressure -180 PSI, Cylinder size 16x20", Tractive effort -17,800 lbs. She also had sister locomotives traveling the Owens Valley. More information can be had by visiting the web site of the Carson & Colorado Society http://www.carsoncolorado.com. and http://www.owensvalleyhistory.com/carson_n_colorado/page50.html.