After the rain, blossoms of spring 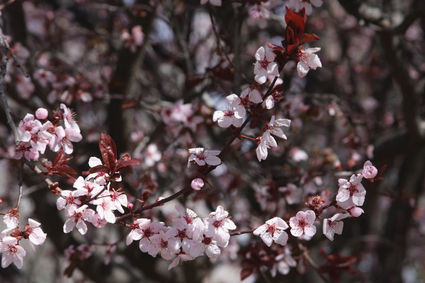 Mountainbase, a private weather reporting station located at Oak Knolls in Golden Hills, reports that the total rainfall in March through the 28th was 3.06 inches, which is 1.41 inches more than usual for the month ("departure from the norm"). The first two months of the calendar year were considerably drier than usual, with 0.91 inches in January (1.26 inches less than normal) and 0.14 inches in February (1.59 inches less than normal). The days and days of the persistent but gentle March rain in the Tehachapi area is a result of an "atmospheric river," which is a river in the sky that carries concentrated water vapor from the tropical area near Hawaii to the Calfornia coast – hence the name "Pineapple Express." According to the National Weather Service, atmospheric rivers, which are hundreds of miles wide and flow a mile above the ocean, can carry as much water as 15 Mississippi Rivers and can provide up to 50 percent of West Coast precipitation. The image on the right, taken Feb. 20, shows a Pineapple Express extending from Hawaii to California. That event delivered massive amounts of rain to San Francisco, northern California and the western foothills of the Sierra Nevada. Image by Jesse Allen and Joshua Stevens, using VIIRS data (Visible Infrared Imaging Radiometer Suite) from the Suomi National Polar-orbiting Partnership and IMERG data (Integrated Multi-satellitE Retrievals provided by the Global Precipitation Mission (GMP).