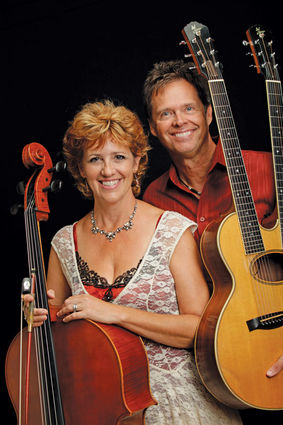 The husband and wife team of Acoustic Eidolon, Joe Scott and Hannah Alkire.

What better way to spend a late March evening than enjoying the elegant sounds of Acoustic Eidolon's cello-guitar duo? The husband and wife team will return to Fiddlers Crossing on Friday, March 30, at 7 p.m. Acoustic Eidolon combines the lush sounds of Hannah Alkire's cello and Joe Scott's double neck "guitjo" invention, and they captivate audiences wherever they play.

Hailing from Colorado, the two have graced stages throughout the US, Europe, Australia and Canada. On their nine CDs and a DVD, these masterful artists explore their signature "new acoustic" sound, blending Celtic, folk, world, Latin and pop musical genres into what Dirty Linen Magazine praises as "a sumptuous musical feast." They play everything from Irish jigs to the Beatles, adding in their own compositions.

Classically-trained cellist Hannah Alkire is recognized internationally for her stunning tone and emotional, impeccable playing. She was born in Berkeley, California, but grew up in Champaign, Illinois in a musical household. Her father played the piano, and her mother was a music instructor. Hannah started playing cello at age eight. Her sister, Sabrina, played the violin, and the two played in the school orchestra alongside bluegrass great Alison Krauss.

Scott began playing guitar at age 12 in his home near Boulder, Colorado. When he was 14, he added banjo, and by 16 he was winning contests at regional Bluegrass Festivals. He toured the country with the New Christy Minstrels, a popular folk group in the 1960s based in Los Angeles.

Returning home, Scott opened a recording studio, and in 1998, was looking for a cellist to record with him. He found Hannah Alkire, who, it turned out, lived only a short distance away.

Hannah had moved to Boulder in 1992 and was performing in symphony orchestras. Eager to stretch herself, she was also playing with rock, funk, and alternative groups, performing at various local venues and national events.

After recording together and forming a musical alliance, Scott and Hannah joined their personal lives and were married in 2001. Along with touring, the two are committed to bringing joy to as many people as possible through their music, and often add in appearances in schools, hospitals, hospices, and even chemo infusion rooms to inspire and help others.

Fiddlers Crossing is an intimate "listening room" where you can meet and chat with the artists before and after the concert, and enjoy freshly brewed coffee and goodies, all included in the price of $20. The venue is located at 206 East F Street at Robinson Street, in Downtown Tehachapi. Tickets may be purchased online at fiddlerscrossing.com or at Mountain Music, Tehachapi Treasure Trove, Tehachapi Furniture in Old Town, and Lucky's Barbershop on Green Street, They may also be reserved by calling (661) 823-9994. The concert begins at 7 p.m. Doors open at 6:30 p.m.

On the horizon: The Nordic Fiddlers Bloc, Bryan Bowers, Guy Davis and The Quitters.