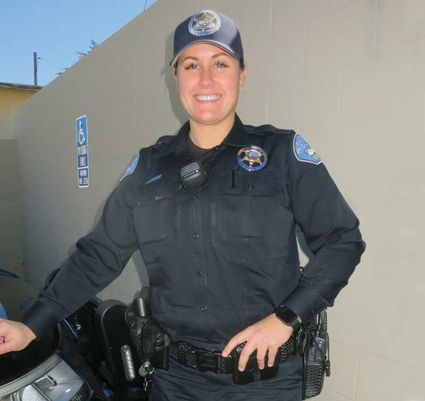 Tehachapi Police Department Officer Amy Smith is a visible presence at the six Tehachapi Unified School District (TUSD) sites. As the School Resource Officer, Smith handles law enforcement problems that arise among the students as well as providing support for the students and staff.

"The kids are great," she told Forde Files. "They are personable, friendly. The kids talk to me."

Smith spends most of her time on the campuses of the two high schools and the middle school, where the police department has offices.

"The main problem is, there is just one of me and there are so many schools," she said.

TUSD has its own security personnel on the campuses, but none who carry the weight and authority of law enforcement like Smith does. On her duty belt she totes a heavy Glock .45 handgun that is firmly locked into place, OC spray, extra ammunition, a radio, baton, flashlight and two sets of handcuffs.

"The job of the School Resource Officer is to enhance student safety, decrease violence, dissuade gang activities and (assure) overall safety on campus," Kroeger said. "Her job is to interact with the kids, respond to potential crimes and investigate. She makes arrests, mentors, counsels, meets with parents and attends discipline hearings."

Smith deals with youngsters who are high on drugs on school grounds and makes arrests for marijuana infractions. She monitors potential gang activity.

Smith said that law enforcement and schools are learning from recent school shooting events. Communities are exploring ways to divert youngsters from potential violence and to keep other students safe.

"All expulsions and suspensions need to be followed up on," Smith said.

Born in Bakersfield and a native of the Antelope Valley, Smith, 40, has been with the Tehachapi Police Department for a year, and the School Resource Officer since August of 2017.

She was a Deputy Sheriff with the Los Angeles County Sheriff's Office for 12 years, working the courts, violent crimes teams, traffic and custody in jails.

The School Resource job is her first assignment specifically with juveniles.

While two of the six Tehachapi Unified School District schools – Cummings Valley Elementary and Golden Hills Elementary -- are in Kern County within the jurisdiction of the Kern County Sheriff's Office Tehachapi Substation, TUSD has a contract with the Tehachapi Police Department to send the School Resource Officer to all six campuses.

When it comes to protecting children there are no jurisdictional boundaries. Any threat to a school instantly brings down an army of law enforcement from all available agencies – Tehachapi police officers, Sheriff's deputies, Bear Valley and Stallion Springs officers, CHP officers, Kern County Fire.

"The majority of us are parents. It does not matter what the jurisdiction is," Kern County Sheriff's Office Public Information Officer Sgt. Stephen Wells told Forde Files.

Wells is an instructor who trains law enforcement officers what to do when confronted with an active shooter situation.

The instructions are unequivocal.

"Go in and engage the subject. Stop the threat by any means necessary, with the lowest use of force."

He said that law enforcement officers need to be (and are) armed with AR-15 weapons.

"You need a precise shot. The AR-15 is the absolute perfect weapon."

The weapon, he said, provides the accuracy needed when other people may be near the shooter.

"It's very clear where the bullet's going," he said. "The officer would be troubled spiritually and morally if he hit the wrong target."

Wells said that the Sheriff's Office receives and investigates a significant number of calls regarding threats.

"Every situation is credible until it is not," Wells said.

Sheriff's Sgt. Steve Battistoni, who has been in charge of the Tehachapi Substation since September, 2017, said the School Resource Officer's role in getting to know the kids is vital. The officer knows when students are upset, who has been suspended or expelled and when that car parked in front of the school looks suspicious. He said it is important to keep in touch with students when they are transferred to a secondary education program.