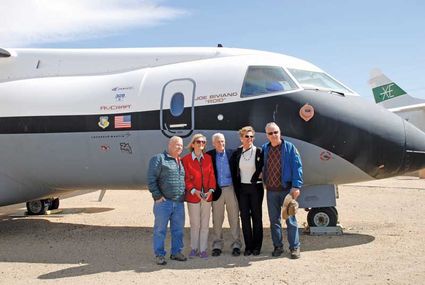 As her last official duty for the FAA before her March 1 retirement, Borden presented the award beneath the nose of the X55A Experimental Transport which Joe "ROID" Biviano and Rob "SKID" Rowe flew as test pilots for Lockheed Martin in Palmdale. When asked if there were other planes he had flown for Lockheed that he could talk about, Biviano replied, "Just this one". Rowe and project engineer "Bubba" Francis were on hand to give Biviano a bad time at the Palmdale presentation. Rowe now works with NASA and Francis for the FAA. Also on hand was composites engineer Sunny Clarkson who also worked on the X55 project.

Karla Borden told the assembled group that when a pilot gets his Wright Brothers award he also receives a folder containing his entire record with the FAA. When she received Joe's she noticed that the middle name was wrong. It said "Frank" instead of "John" so she reordered the certificate. As a result of this error, Joe Biviano not only received his FAA record but that of his father.

Biviano's father was a mechanic in the U.S. Navy on the East Coast. When Joe was 13 years old his father got him a flight in an L3 jet fighter. Biviano said he was scared stiff and didn't want to go. His father told him he was going and Joe said it was a "white knuckle flight". He joined the Civil Air Patrol at 13 and was one of about 10 students to win a pilot scholarship. He completed his flight training in one month and soloed on July 22, 1967 in Pennsylvania. Biviano said that once he got his license, he knew the Navy was for him. He joined the Navy soon after he completed his Bachelor of Science Degree in Aerospace Engineering at University of Massachusetts, Amherst.

His six-and-a-half years in the Navy were spent in the Pacific. He spent 16 months of that time in Japan where he flew A4 and T2 jets and served as a pilot and flight instructor. After leaving the Navy in 1979, he became an FAA Certified Flight Instructor including Instrument and Multi-engine ratings.

He was snapped up by Lockheed Martin in 1980 and, while employed there in 1993, he added FAA Certified Airframe and Powerplant Mechanic to his list of certifications. He went back to school, sponsored by Lockheed, and received his Master of Science Degree in Aviation Safety Management in 2001 at Embry-Riddle Aeronautical University. By the time he retired from Lockheed in 2015, he had accumulated a long list of positions held while he was there: Wind Tunnel Test Engineer, Structural Test Engineer, Reliability and Maintainability Engineer, Flight Safety Engineer, Flight Test Engineer and Engineering Test Pilot. 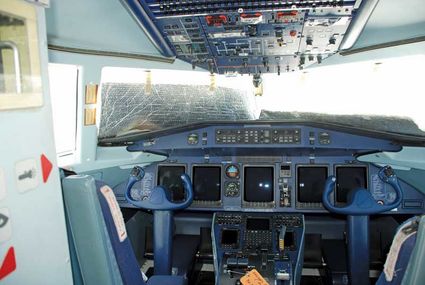 Cockpit of the X55A Experimental Transport.

On most weekends Joe Biviano can be found at his hanger at Tehachapi Airport. He presently owns two-and-a-half aircraft, a Piper PA28-140, a Thorp T-18 experimental aircraft designed in 1963, and a partially completed Van's Aircraft homebuilt RV-6. He is also helping to rebuild a World War II era P51 which is kept at Camarillo Airport on the Ventura coast. He has flown approximately 7600 hours in over 20 different aircraft and has around 3000 hours of flight instruction. His wife Zanya is also a pilot. They met in 1993 when both were part of the Angel Flight project, picking up patients from rural areas and transporting them to hospitals.

Currently, Joe gives pilot flight safety seminars for the FAA, with one coming up this month in Las Vegas. Last December, he gave a very humorous seminar at the Tehachapi Police Department Community Room for senior pilots which was also sponsored by the FAA.