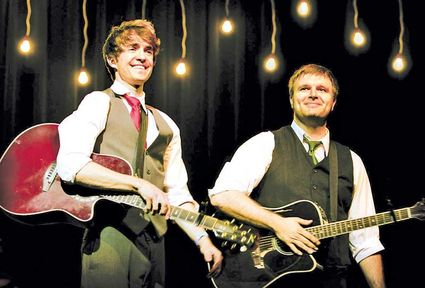 In the 1970s, some folksingers, including Bob Dylan, began to "plug-in" and "amp up" like the rockers. Now, pop music is coming full circle as many rock 'n' rollers un-plug. For instance, the two former rockers of Ryanhood, Ryan Green and Cameron Hood, were named 'Best Group/Duo in the 2014 International Acoustic Music Awards (IAMAs). They will demonstrate this blending of musical genres when they return to the stage at Fiddlers Crossing on February 23.

Green and Hood met in high school where they had a respectful rivalry between their two rock bands. They faced off annually in a "Battle of the Bands". While Hood's band won more of the competitions, Green's guitar chops were impressive, and earned him a scholarship to Boston's prestigious Berklee College of Music.

Cameron studied art at the University of Arizona, and the two musicians started what they would call "a long-distance musical relationship," mailing each other song ideas and getting together during college breaks to rehearse and perform. After graduation, Hood moved to Boston to join Ryan. The duo became full-time street performers, developing a rapport with audiences that has become a hallmark of their shows.

They were soon discovered by a college concert recruiter and brought their high-energy, interactive street-performer approach to that market. They quickly became one of the most popular bands on the circuit, playing upwards of 130 college dates a year. Hood's rich and folky lead vocals, Green's explosive guitar and mandolin riffs, and their airtight vocal harmonies prompted the Idaho State Jounal to call them, "this generation's new mix of Simon & Garfunkel, America and U2."

They have toured with Jason Mraz, recorded an album with grammy-winning producer Ross Hogarth, shared stages with Matt Nathanson, Train, American Authors, and Lifehouse, and even got tweeted about by Ellen DeGeneres. Ryanhood has collectively performed more than 800 shows in 42 U.S. states, where their cross-generational sound has been equally at home in colleges, coffee-houses, concert halls, churches, and living rooms.

Now, twelve years after their street start, Ryanhood's star is still on the rise. Their sixth and newest album, Yearbook, finds the band returning to the intimate storytelling and acoustic guitar interplay that was a hallmark of their early work as buskers.

They currently reside in their hometown of Tucson, Ariz., where they have won more than a dozen Tucson Music Awards including "Best Folk Band" and, yes, "Best Rock Band".

Fiddlers Crossing is at 206 East F Street at Robinson Street, in Downtown Tehachapi. Tickets may be purchased next door at Mountain Music, at Tehachapi Treasure Trove, Tehachapi Furniture in Old Town, and Lucky's Barbershop, or online through Fiddlerscrossing.com. Tickets to the concert are $20, and as always, coffee and goodies are included. The concert begins at 7 p.m. Doors open at 6:30 p.m.

On the horizon: Golden Bough, Acoustic Eidolon and The Nordic Fiddlers Bloc.