Recollections of the 1970 California 1000 Air Race at Mojave 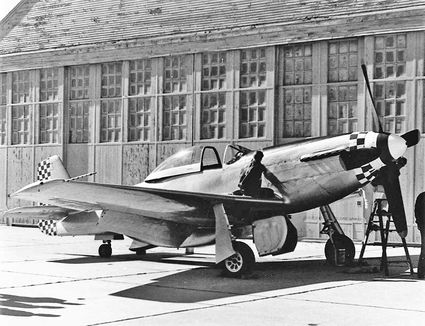 The North American P-51 Mustang pictured actually belonged to Dave Zeuschel, but race pilot Dr. Cliff Cummins was in command during the California 1000 Air Race held at Mojave, finishing second. Notice the photo was taken in front of one of the original Marine Corps Air Station hangars. It was constructed in 1942.

(A little air race history note: Dr. Cummins had his own P-51 which carried the name "Miss Candace" from 1972 until around 1977. Trucking mogul Wiley Sanders bought the plane and changed its name to "Jeanne" Race #69. I remember watching Jeanne streak around the pylons at Reno, what a glorious sound it made!)

The first time I helped with an air race was at Mojave Airport in October 1969. Darryl Greenamyer was good enough to attend a fund-raiser I had chaired for the Governor Reagan Campaign, at the home of Ted and Dixie Eliopulos in Lancaster. The theme of the event was "Come & Mingle with your Favorite Sports Hero." Darryl had just set the World Speed Record in a Piston Engine Aircraft and I liked airplanes, so I mustered the courage to contact him. I was surprised when he said, "Yes." Dodger first baseman, Wes Parker and Indy car driver, Dan Gurney also attended the dinner. Darryl brought a tall friendly guy with him who just happened to be the manager at Mojave Airport, Dan Sabovich.

It was that night that I asked Darryl if I could help work at the races, he gave me some posters and flyers and I signed on as a volunteer.

Darryl was also involved in the 1970 California 1000 Air Race. He asked me if I could get a Winner's Wreath made somewhere. I lived in Lancaster at the time and went to Evelyn's Flowers for the wreath. It was a Styrofoam horseshoe covered with red carnations, leather fern and ribbons.

"Swarms of private planes flew into Mojave Airport to see the races. As they came in for landing, mostly from the west, it looked like an invasion," Mojave Desert News quote. "Tower officials estimate 700 to 1000 planes and it was fortunate there was only one crash on takeoff after the race was finished." (A Piper Cherokee lost power on takeoff and crashed into the desert. It apparently had taken off on runway 04.)

Clay Lacy's Super Snoopy DC-7 with Bob Love in P-51 on his wingtip.

I don't remember the crash, but I sure remember watching all of the airplanes taking off after the races as the sun was setting. They used every runway available! Sometimes taking off towards each other! It was a miracle that all but one aircraft survived!