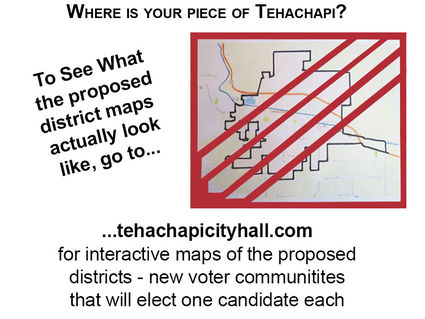 The interactive maps are available on the Tehachapi city web site, www.tehachapicityhall.com. Click on "District-based Elections" on the blue bar on the left side of the home page.

A resident of a city that has adopted a district-based election system under threat of litigation – as the city of Tehachapi is in the process of doing -- is suing that city and the state of California, arguing that the system is unconstitutional.

The suit asserts that the district-based system as defined by the California Voting Rights Act of 2001 (CVRA) is illegal because it requires a city to draw boundaries based primarily on race.

In the most recent action in the case, Higginson's legal team has filed a motion for preliminary injunction to stop the city of Poway from enacting its districting plan. The first election under the new districts is scheduled for 2018.

"Absent intervention," the the motion for preliminary injuction says, "Poway will hold city council elections under a map that infringes not only Higginson's right to vote, but the voting rights of every Poway resident."

The motion for injunction argues that the CVRA "is putting California localities in an impossible situation. If these communities do not comply with the CVRA,they will be sued for millions of dollars. But CVRA compliances forces them to engage in racial gerrymandering."

The Poway City Council jettisoned its at-large system of voting (in which all registered voters can vote for any candidate) in favor of the by-district system (in which voters can vote for and elect only the candidate who lives in their district), after receiving a letter from Malibu attorney Kevin Shenkman demanding that the city adopt a district system or face litigation.

The city of Tehachapi received a nearly-identical letter from Shenkman on July 4, 2017, claiming that Tehachapi has a history of racial bias and that the city's at-large system dilutes the ability of minority candidates to win elections. Shenkman said he wrote on behalf of the San Antonio, Texas-based Southwest Voter Registration Education Project. He told Forde Files that a resident of Tehachapi was the complainant.

While the CVRA does not require the imposition of districts, it "disfavors" at-large systems and has been amended through the years to make it harder to challenge.

The Tehachapi City Council subsequently voted to establish election districts within the compressed 90-day "safe harbor" period of time to avoid the certainty of costly litigation.

Cities that have fought to preserve their historic at-large systems have, so far, lost in court battles.

The document says the fees are going into the pockets of a select few attorneys and organizations.

Noting the growing number of California cities that are being compelled to switch to district-based elections, the injunction states that the CVRA "... is wreaking havoc throughout the state."

In 2016, 86 percent of the cities in California used at-large voting.

Edward Blum of the Project on Fair Representation, a non-profit foundation that is providing counsel to Higginson, said that if the case goes to the Supreme Court and districting is struck down, the cities could switch back to at-large elections.

Blum said that Tehachapi is "closest to the smallest" jurisdiction to undergo the transition to district elections. A city in California of 8,000 has switched, he said.

Poway City Manager Tina White and the plaintiff's attorney William Consovoy declined to comment to the Forde Files on the current high-stakes litigation, which will be a landmark case if it reaches the Supreme Court. Tehachapi City Council members, while stating their opposition to the demand at the initial presentation of the matter by outside counsel Youstina Aziz, have remained mute under the provisions of the Brown Act and the constraints of possible litigation. Public reaction in Tehachapi has been subdued and no groundswell of opposition to the complex issue has emerged, but public speakers at the City Council meetings have raised puzzled questions – "How can an outside person who knows nothing about our city impose this upon us? – "Why Tehachapi?" -- "No one has ever complained before."

At an Oct. 12 special Tehachapi City Council hearing, Dr. Justin Levitt of the Glendale-based National Demographic Corporation presented three draft models of five districts for Tehachapi, each with slightly different configurations. The boundaries are based on 2010 U.S. Census data and state of California data bases.

The population of Tehachapi as recorded in the 2010 census was 4,414. This figure includes the California Correctional Institution, as the city proper is barely 9,000. In May of 1998, the city annexed the prison, which is 11 miles away in Cummings Valley. The prison population has dropped dramatically in the years since the 2010 census, due to court-ordered prison inmate reduction and new laws that classify former felonies as misdemeanors. While draft maps indicate the prison belongs in district four or three or five, demographer Levitt said the prison population is not included in the districting scheme, as inmates cannot vote.

The 15 districts outlined in the three draft maps have an average population of 1,703 each. As of Oct. 26, according to the Kern County Registrar of Voters, there were 4,375 active registered voters in the city of Tehachapi. If the active voters where divided equally, each of the five new districts would have 875 voters to elect its one candidate. (Equality of numbers of registered voters is not a requirement of the legal criteria for establishing districts; the criteria require nearly equal populations).

A total of 5,107 residents voted in the last general election, on Nov. 8, 2016, when four people were running for two City Council seats. The seeming anomaly in totals arises from the non-static nature of the voter rolls. The numbers change constantly as people cancel their reigstrations upon moving or are cancelled for other reasons.

The City Council is asking the public to help decide which is the best map.

Levitt said his company provides expertise in analyzing the demographic data, but it is up to the residents to come up with the final divisions.

He said every community starts with a "gut reaction."

"We need that gut reaction to the boundaries. We start there and work toward the details. We can't tell you what the criteria is. We want you to tell us."

Tehachapi resident and civic activist Soccoro Schmidt, whose reaction at the first hearing was, "What happened to self-determination?" appealed for unity at the Oct. 12 hearing.

"This is being done to us," she said. "We are not asking for it. It would be irresponsible on the part of the council to not accept the time line we have to meet. Someone else set it for us. If we don't meet the timeline we will be sued. We need that money for police protection, water renewal, sewage. We have to keep the city running. We have to make this work."

"The only thing positive," she said, "It gives neighbors the opportunity to get to know people in the neighborhood."

Public speaker Jim Roberts said, "They're suing us for doing nothing wrong."

Counselor Aziz said that no lawsuit has been filed yet, and "there is no proof of racially polarized voting."

Shenkman based his claims of bias on an alleged lack of Hispanic representation among elected officials. His research method was to data-mine for candidates with Hispanic surnames who lost elections and additionally he assumed there have been no Hispanics on the City Council.

He came up with two candidates with Hispanic surnames who had lost elections, both of whom had reasons other than ethnicity for not prevailing in their respective races. One of those cited, Mary Lou Corpus-Zamudio, who is human resources director for SunSelect in Cummings Valley and a long-time participant in local community affairs, was incensed that Shenkman had used her name to his profit.

Shenkman apparently was unaware that the city – historically known for racial harmony and middle-class strength -- has had three Hispanic mayors, two of whom have non-Hispanic surnames, and has other community leaders of Hispanic descent, including Schmidt and Vance.

Public speaker attorney Barbara Reynolds said at the Oct. 12 hearing that the potential lawsuit against Tehachapi is non-existent, with a murky anonymous "secret plaintiff."

"Citizens of this great city are represented very well," a frustrated Tehachapi City Manager Greg Garrett told Forde Files. "The state is eroding our freedoms...It's getting harder and harder for cities to exist."

Garrett said the city has to pick its battles. "This is not the end of the world. I deal with this every day from Sacramento and Washington, D.C. It keeps me up at night."

The money spent on counsel and the demographer, he said, "could be spent on public service. They are taking money out of the residents' pockets. There are so many more things relevant to the long-terms health of the city." 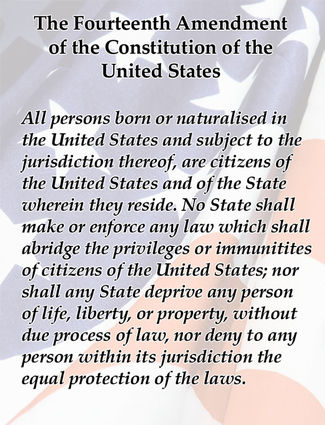 Impetus for the drive to dismantle at-large elections and increase the power of minority voting rights through district-based voting and comes from several minority organizations, including the Southwest Voter Registration Education Project, whose motto is "Su Voto es Su Voz" ("Your vote is your voice"), the NAACP Legal Defense and Educational Funds, Inc., the Asian American Justice Center and the Mexican American Legal Defense and Educational Fund (MALDEF). The Southwest organization is running a full-court press to prepare voters for elections in 2018. "We're launching a voting rights precinct organization drive in Jan. in 69 jurisdictions where we are pushing district elections!" says its website.

The final hearing and City Council vote on Tehachapi election districts will be during the regular City Council meeting on Nov. 6 at 6 p.m. at the Wells Education Center, 300 South Robinson St. For previous Forde Files stories in The Loop Newspaper on this subject, see volumes 3305 (Sept. 16-30), 3306 (Sept. 30-Oct. 14) and 3307 (Oct. 14-28; includes district maps), all online at http://www.theloopnewspaper.com, click on The Forde Files.