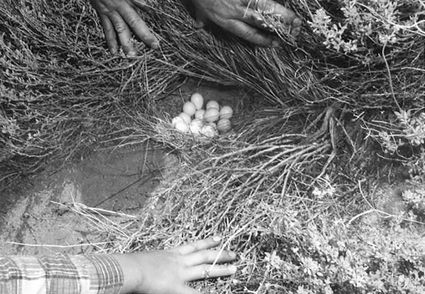 A quail nest with 14 eggs located in Bean Canyon.

I have written about the Kern-Antelope Historical Society meetings, field trips, and special events. While searching my mother Marion Deaver's files I found an October, 1961 quarterly bulletin which featured some of the history of the organization.

My parents Paul and Marion, my brother Bill Deaver, and me were all charter members of the group which held its first meeting May 26, 1959 (I was nine). The group held its organizational meeting Dec. 15, 1959, and was incorporated in December, 1960.

The group wanted to become a member of the California Historical Society. Glen Settle wrote a letter to the state organization outlining the new historical society's creation and business in its first year.

In that letter Settle explained that the monthly meetings of the group were held the second Tuesday of each month except July and August (no air conditioning at the Miner's Hall of the Burton's Tropico Goldmine Gold camp.

Issues of the quarterly bulletin included articles written by area "old timers." Settle noted that Paul and Marion Deaver attended the meetings (and me) and used such articles in the Bakersfield Californian.

He added that the Deaver's also attended all field trips and wrote about the adventures with photos for the Californian. (Thus explaining how I developed my personal love for area history.)

I really loved to attend the field trips. While there was always something in particular to see, there were also amazing other discoveries.

I remember one trip in which we were going up into Bean Canyon to view some Native American artifacts. As we were walking up the canyon a quail flew out of a bush right in front of us on the trail.

Turned out the momma bird was trying to distract us from her nest in the bush – with 14 eggs in it! Everyone joked that the momma quail must have been babysitting. Of course my mom took a photo of the nest. (Which – believe it or not – I found to print with this column!)

Settle told the state organization in his letter to them that Settle and his wife Dorene had started a museum at Tropico Gold camp near Rosamond, and that the historical society members had assisted with the collection of old photos and historic buildings that were about to be destroyed.

In 1961 there were 14 buildings that had been moved to the gold camp. The group was in the process of furnishing them with period pieces and relics that had been located.

Recordings were made whenever an "old timer" spoke about local history at the monthly meetings.

The historical society made sure that local area artist at that time Charles LaMonk was kept apprised of field trip locations that he could preserve. His paintings of area Native American sites of rock paintings were faithful in their reproductions, Settle noted.

Settle used the slides and went to the old sites and took modern colored slides to show "The Antelope Valley –Then and Now."

The slide show was presented to many civic groups in the area and to over 450 AVHS students in their history classes.

The group's future plans at that time included showing the state organization several sites to be considered for historical markers.

I remember most of the meetings and field trips that I attended with my parents. I would like to know what happened to all those old recordings of "old timers."

Anyone have any idea? The Settles are gone and the Gold camp is closed now.