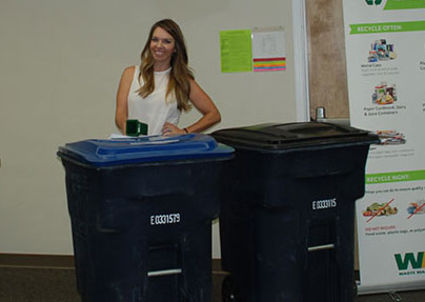 Beginning at the end of September, Tehachapi residents will have two barrels, the regular black barrel that we all have for trash and a new barrel with a bright blue lid for recyclables.

The second of four public hearings regarding the transition from at-large council representation to district representation was held at the Sept. 18 City Council meeting. Attorney Youstina Aziz from the law firm Richards, Watson and Gershon clarified some of the concerns that came up at the last meeting.

Councilman Hetge voiced a concern that CCI, which is considered part of the city, would be able to participate in elections as it contains about one fifth of the city population. Ms. Aziz assured him that new voting districts would be formed without that population.

As part of a very lively discussion, Ms. Aziz said the districts would be formed to be equal in population not geographical area and will include the entire population including children and not just registered voters. The geographic areas will be different in size. Candidates running for council must live in the district in which they run. Commissions consisting of appointed members like the Planning Commission will not be affected.

The city has 45 days from the July 24 receipt date to act on the letter sent by the law firm of Shenkman and Hughes in Malibu. City Attorney Tom Schroeter said that "this is about legal fees and time limits." He said there is no law that cities be required to adopt district voting, all the cities that have challenged these letters charging racially polarized voting have lost, costing millions of dollars. However, "Shenkman has the burden of proof," said Schroeter. City resident and author of the Forde Files in The Loop Newspaper, Tina Cunningham, said that she did not feel that Shenkman had done his homework when it came to Tehachapi.

The last two remaining public hearings concerning the formation of voting districts will be on Oct. 16 and Nov. 6 at 6 p.m. at the Wells Education Center.

Sandra Pursley and Josh Mann from Waste Management presented the new recycling program for the City of Tehachapi to the City Council. Sandra explained that everyone will now have two barrels, the old one we all have for trash and one with a bright blue lid for recycling. The new barrels are due to be distributed between Sept. 25 and Sept. 29. 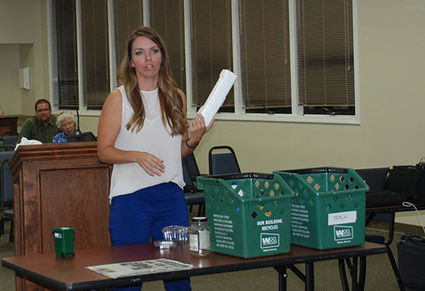 Sandra Pursley of Waste Management shows the City Council what items can be recycled and what goes in the trash.

Sandra went on to illustrate what items should be thrown in the trash and what should be recycled. She showed the Council several items and asked which receptacle they thought the item belonged in. Her "rule of thumb" was "if in doubt, throw it out". She said that clean dry paper, cardboard and glass can be recycled. She also suggested that plastic shopping bags should be returned to stores and recycling centers. Waste Management is planning on an Open House and a Chamber event, as well.