Big changes to the Board of Equalization 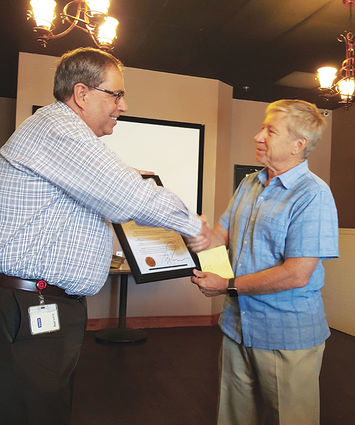 George Runner, representative of the California State Board of Equalization, District 1, spoke to the Greater Tehachapi Chamber of Commerce at their Sept. 19 luncheon concerning the new changes affecting the Board. Elected in November 2010 and reelected in 2014, Runner represents the Board's First District and is a leading advocate for California taxpayers. During his time in office, Runner has worked to improve California's tax policies and practices and to create and retain more private sector jobs in our state.

Prior to his election to the Board, Runner served 12 years in the State Legislature and was the author of the California Amber Alert and Blue Alert bills. He authored Jessica's Law, a ballot initiative approved by more than 70% of California voters in 2006.

Runner told the Chamber that effective July 1, 2017 the Board of Equilization will become the newly created California Department of Tax and Fee Administration (CDTFA) and the Office of Tax Appeals. This will replace the elected representatives of the BOE with paid bureaucrats.

The State Board of Equilization was formed in the late 1800s to deal with property tax inequities in California and is part of the State Constitution. The Board was made up of four districts managed by elected officials under the State Controller. Runner's district ran from Los Angeles up the Central Valley and contained nine million constituents. BOE members helped people with all kinds of tax issues and all the board members worked together to solve tax problems. Under the new system, the Board has been replaced by a panel of three state employees and tax appeals will no longer be heard after Jan. 1, 2018.

"You used to be able to bring your tax problems to elected officials, now we're just like every other state," said Runner. "State employees will always vote against the taxpayer and in their own interest."

The new organization operates under the direct control of Governor Brown. "The governor wants control of all revenues," said Runner. "It should not be a surprise that the legislature is trying to get more of your tax dollars rather than less." The restructuring was the result of the passage of AB102, the Taxpayer Transparency and Fairness Act of 2017. Runner added that the representatives from Kern County voted against the measure but were outvoted.

Runner presented a Letter of Recognition to Tom Mendes, who was his liaison to the Kern County communities. Mendes has an agricultural background and understands local businesses. He will be also be absorbed into the new CDTFA.