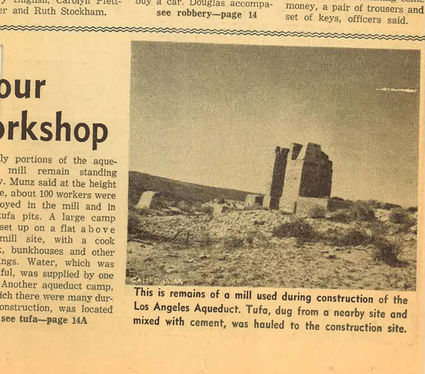 Over the centuries some areas of East Kern have served more than one purpose. This was found to be true in 1965, when members of the Kern-Antelope Historical Society visited a site near Rosamond that once had been a place where tufa was mined.

The tufa was mined to be used in the construction of the Los Angeles Aqueduct. All that was left in 1965 was the remains of one mill tower that processed the tufa. The tufa was then mixed with cement and used for construction.

Upon closer inspection by those who visited the site earlier, it was discovered that Native Americans had used the site 9,000 years earlier as a "tool workshop."

According to an article by my mother Marion Deaver, the site had been surveyed in 1964 by a group from the University of California at Los Angeles, whose members found over 200 specimens of early Native American tools. She toured the site with the historical society and documented the event.

The UCLA group determined from examination of the tools left behind that the area was used to make tools, leaving fragments and discarded inferior tools behind.

Among specimens examined by historical society members were small grinding tools, digging tools and fragments chipped off while constructing the tools. The material that was used was rhyolite. A large granite bowl was also discovered.

Move forward to 1910 and a bustling mill was constructed, employing over 100 workers. They lived in a camp that was set up on a flat spot located above the mill. The camp included a cook shack, bunkhouses, and other buildings. A nearby well provided water to the camp.

The tufa was mined near the camp, crushed in the mill, and mixed with cement, then hauled from the then Monolith Portland Cement Company (now Lehigh cement).

But alas, the project was not all that successful. The tufa took way too long to set up, slowing down construction and since that was not a good thing, the site was abandoned.

The final blow was when heavy winter rains washed out the slowly setting materials, and officials gave up the plan to incorporate tufa into the cement.

Searching the site in 1965 revealed pieces of harness, old chains, and other debris located in the brush and weeds left over when the site was abandoned.

The property was "owned by the government" but was later homesteaded by a Mrs. Erenfeldt. She made a home out of the two mill towers by boarding up two sides and putting a roof on the structure. None of that home remained when the site was visited in 1965.

Apparently we are not the first ones to use one site for several uses.