A Spitfire at Mojave, a decade ago

The aircraft in the photo above is a rare Supermarine Spitfire Mk. IXc/e that underwent flight testing here at Mojave Airport over a decade ago before it was shipped to the TAM Air Museum Americana in Brazil.

The Supermarine Spitfire is a legend in British aviation history and along with the Hawker Hurricane, successfully defended England in the Battle of Britain (1940-1941) against Germany's Luftwaffe.

We were so lucky to actually hear the 'Spit' flying over Mojave in July 2007. It was painted in the RCAF camouflage scheme and looking as though it just flew through a time warp from 1941, the extraordinary piece of history replica or kit plane landed at Mojave Airport for fuel.

The Spitfire pictured in this article had been acquired by David Price of the Santa Monica Museum of Flying sometime after 1987. This very aircraft is the only Spitfire flying that actually operated with the U.S. Army Air Corps during WWII.

It was delivered to 6 MU (Maintenance Unit) in July 1943, and then was sent to the Mediterranean to operate with the Allied Air Force. Later, it was transferred to the United States Army Air Corps and was flown between October 1943 and May 1944.

After the war, it was sold to South Africa and wasn't flown. This magnificent bird was stripped of parts and ended up being sold for £3 to be used as a piece of playground equipment!

Fortunately it was spotted from the air by some good Samaritans in 1967 and was finally returned to flying condition in 1975. It was shipped to California in 1986 or 1987 and was registered as N930LB.

The paint scheme chosen depicts the famous aircraft flown by RCAF (Royal Canadian Air Force) Wing Commander 'Johnnie' Johnson, with serial number EN398 and Johnson's initials JEJ on the side of the fuselage.

Johnson had a total wartime score of 34 confirmed kills, 7 shared, 3 probable (and two shared), 10 damaged (and three shared) and one shared on the ground during WWII. He began flying EN398 on March 16, 1943 and by the end of May had added six victories and one shared victory to his score. In June, Johnson destroyed two FW-190's and damaged a Me-109.

Johnson's shooting skills were far above average and he had his aircraft's weapons harmonized to a single point, rather than spreading out over a circle that was a few feet across.

Impressively, EN398 never broke off a mission due to mechanical failure and never suffered a scratch during enemy action.

Powered by a Rolls-Royce V-12 engine (called 'Merlin' because it was considered to be magic), had a top speed of 355 to 451 mph. It had a graceful elliptical wing with a thin airfoil that, in combination with the Merlin's efficient two-stage supercharger, gave it exceptional performance at high altitudes.

I have always enjoyed the movie "Spitfire," made in 1942, with actor David Niven, in the lead role as Reginald Mitchell. The motion picture did a good job telling about the evolution of this beautiful successful fighter.

A new movie, DUNKIRK is due to be released on July 21st in IMAX and will feature beautifully preserved Spitfires, owned by Texas businessman and world famous aircraft collector, Dan Friedkin. Be sure to see it! You can see Dan and his good friends Steve Hinton, Sr. and Ed Shipley fly P-51s and F-86s with The Bremont Horsemen formation team at airshows all over the world and at the Planes of Famer Air Show at Chino Airport every year in May. 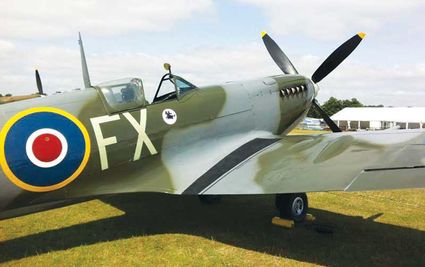