A Dragon at Mojave 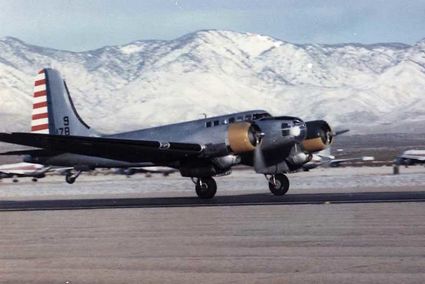 Takeoff from MHV to McChord AFB in December of 1985.

This World War II vintage twin-engine bomber was developed and test flown by Douglas Aircraft at Clover Field, now known as Santa Monica Airport and was designated as the B-23 Dragon. It was first flown in July 1939 and incorporated many features of the Douglas DC-3 commercial transport.

My husband, Al Hansen and his friend and partner, Ascher Ward bought their B-23 from the University of Washington and flew it from Kingman, AZ to Mojave Airport in late 1984. The plane had served the University as a weather survey craft for meteorology students. All radar and weather equipment was removed and it was returned to its original configuration.

Only 38 B-23s were built, though it was mechanically sound and dependable, it was almost obsolete as soon as it rolled off the assembly line.

It had a wingspan of 92-feet, a fuselage length of 58-feet, 6-inches and had a max weight of 32,400 pounds, carrying 4,000 pounds of bombs internally. Two Wright R-2600-3 radial engines powered the Dragon. Boeing developed and built the larger B-17 Flying Fortress at about the same period of time, which had two more engines and a great deal more firepower.

At the beginning of World War II, it was the B-17 that went into mass production. The few B-23s flying were used mainly as troop transports. The military redesignated them as UC-67s.

Al's B-23 didn't accumulate wartime glory, but it did have its own glamour. We were told, although it wasn't confirmed, that the first post-war owner was billionaire Howard Hughes, who favored the plane for transporting VIPs on business and pleasure excursions. Just to think that Jane Russell or possibly Jean Harlow enhanced the beauty of this plane from time to time gives it more charm.

Some work had to be accomplished in Kingman before the aircraft could make the ferry flight, due to the hard landing this rare aircraft had endured. The left landing gear brace was broken and a new stationary brace was made. It was flown to MHV with gear down and also, delivered to McChord AFB with the gear down on Dec. 12, 1985.

Both props were damaged and the left Hamilton Standard prop had to be replaced – right prop was repairable for ferry flight. The left wingtip was also damaged.

Retired TWA airline captain avid antique-airplane collector, Bob Van Ausdell, ferried the Dragon from AZ to Mojave. Van Ausdell flew the beautiful Lockheed L-1011 Tri-Star for TWA. During World War II, he flew B-25 bombers in the Pacific, and after the war he became a pilot for TWA.

Al and crew restored the Dragon to its original military configuration at Mojave, complete with a U.S. Army Air Corps (USAAC) paint scheme and glass nose.

On December 11, 1985, Van Ausdell climbed into the left seat again, with Al as co-pilot, and they lifted from the Mojave Airport on their way to McChord Air Force Base near Tacoma, WA. A clean dusting of snow had covered the Tehachapi Mountains and the floor of the desert, as they floated off the runway.

First stop was McNary Field in Salem, OR, Van Ausdell's hometown, where a C-130 from McChord AFB joined the vintage bomber and crew. Al said the C-130 had the back cargo door open on the Hercules as they led the Dragon to McChord.

This Air Force Base was anxious to receive the Dragon for their museum, as McChord's 17th Bombardment Group and the 89th Reconnaissance Squadron received their first factory fresh Dragon Bombers in Feb. 1940.

B-23 restored to Military colors

Weather around the northwestern states is often unfavorable for VFR flying and it was getting thick as pea soup when they were coming into McChord. The C-130 flew alongside and helped line them up for the runway. Al said, "As soon as we touched down on the runway, we just rolled into a huge fog and brought it to a stop on the runway." Tugs had to come out and tow them off, because there was no way to see which way to taxi.

Mojave's Dragon is now on display at McChord Air Museum in Washington. Al and Ascher traded the B-23 and some display F-104 Starfighters to the Air Force Museum for other aircraft.

For more information on this B-23, check out McChord Air Museum's website, at: http://www.mcchordairmuseum.org/REV%20B%20MAM%20COLLECTION%20B-23%20BORDER.htm