Off they go... The parade of construction trailers that have been a fixture at the Replacement Tehachapi Critical Access Hospital site at Capital Hills since February, 2013 are being removed as the contractors move on to other jobs. Project Manager SHP Project Development's report to the Jan. 17, 2017 Tehachapi Healthcare District board of directors meeting at 305 S. Robinson St. states that construction is complete. The city of Tehachapi Planning and Building & Safety final inspections are being carried out on the non-state-regulated construction (the administration building, back of house utilities, landscaping, roadwork, grading). The Kern County Health Department has scheduled an inspection of the kitchen. The California Office of Statewide Health Planning and Development (OSHPD) will inspect the patient buildings prior to issuing a certificate of occupancy. When the hospital is stocked, staffed and ready to operate, the California Department of Public Health will inspect every nook, cranny and management procedure before issuing an operating license. Then the facility can open its doors. The OSHPD certificate of occupancy and the final operating license will be accomplished in the third quarter of 2017 (July, Aug., Sept. 2017). On Jan. 31, Adventist Health introduced its new branding to employees. The new brand is Adventist Health, followed by the location name. As an example, San Joaquin Community Hospital Adventist Health is now Adventist Health Bakersfield. The changeover is easy for the new Tehachapi hospital, as it did not have an official name yet (It was briefly called Adventist Health Medical Center Tehachapi Valley). The sparkling new facility will be Adventist Health Tehachapi Valley Hospital. The clinics will be Adventist Health Community Care (- California City, - Mojave, - Tehachapi). David Eastman of Adventist Health, speaking at the Feb. 1 Greater Tehachapi Economic Development Council at the Tehachapi Police Department Community Room, said that the community has demonstrated that it wants a high level of health care by voting bonds that have paid for two-thirds of the $96.5 million project. A video featuring Eastman, Tehachapi City Manager Greg Garrett and Chief Nursing Officer Julianna Kirby shows the stunning interior of the new hospital. The Intensive Care units, Kirby says in the video, "remind me of ICUs on TV." The chapel is near the hospital entry. "We've wanted it [chapel] . We've fought for it," Kirby said. She said all the rooms are private – "We are so excited. No more four beds to a room." The district has leased its properties to Adventist for 30 years in return to a pre-lease payment of $27 million, which enabled the completion of the new hospital. Please see the recent photo of the hospital on the Tehachapi Valley Healthcare District web site, http://www.tvhd.org. 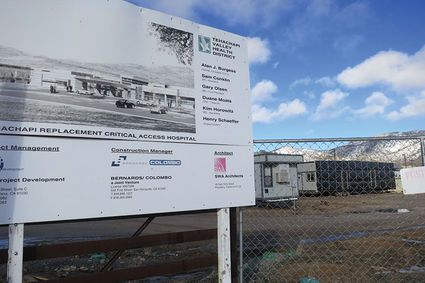